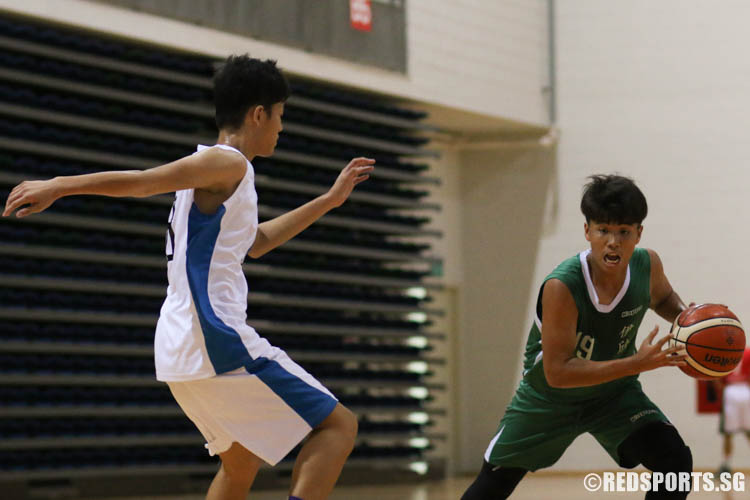 With this win, Ahmad Ibrahim have a 2-0 win-loss record after previously defeating Punggol Secondary 48-32 in the North Zone B Division Basketball Championship. They will play Christ Church Secondary next.

On the other hand, Edgefield drop to a 0-2 record after losing to Christ Church 66-78 previously. They will play North Vista next.

Zafir (AI #24) dominated with his height under the basket and managed to vie for two offensive rebounds.

With point guard Angelo Mesina (AI #15) leading the gameplay, he drew two free throws in his favour. Bryan Kan (EF #0) utilized his height as well to posterize approaching Ahmad Ibrahim players, shutting down two shots and ending the first quarter with a tie of 13-13.

Turnovers from Ahmad Ibrahim resulted in Edgefield having chances to drive towards the basket. It was as though Ahmad Ibrahim had not warmed up yet.

This left Ahmad Ibrahim with no choice but to use men-on-men defence after the timeout. The defence allowed them to steal the ball and score an open layup. However, Edgefield started shooting from the two-point line to push up the score.

Ong Jun Min (EF #10), who was left wide open, managed to sink a two-pointer despite Zafir’s (AI #24) long arms rejecting three shot attempts from his teammates under the basket.

Angelo Mesina’s (AI #15) communication with his team allowed him to easily pick-and-roll through Edgefield’s defence and score, securing some fouls as well.

At halftime, Ahmad Ibrahim were trailing 22-27.

With Zafir (AI #24) under the basket, he managed to block two more attempts from Edgefield while scoring two offensive rebounds to.

With four Edgefield players in the paint, they managed to deny three layup attempts from Ahmad Ibrahim.

Undaunted, Angelo Mesina (AI #15) shot in an open three-pointer to give his team a two-point, 36-34 lead at the end the third quarter.

Down to the last quarter, Edgefield started losing their momentum as they started to run out of energy. They missed two shots while Ahmad Ibrahim took advantage to fastbreak twice but which also proved unsuccessful.

The score remained stagnant despite both teams going for back-to-back fastbreaks. It was only until late quarter that Zafir (AI #24) scored his two free throws to pull away with the lead.

With Ahmad Ibrahim warming up and strengthening their 2-on-1 defence, they managed to force turnovers to score two more easy baskets, eventually ending the fourth quarter victorious at 53-40.

Angelo Mesina (AI #15) said, “Our defence at the first quarter was bad but improved at the next quarter. We tried to make them play our pace and control the game.

“Our strategy and turnovers were bad as we didn’t really control them in the first quarter but we still managed to come back in the second quarter.”