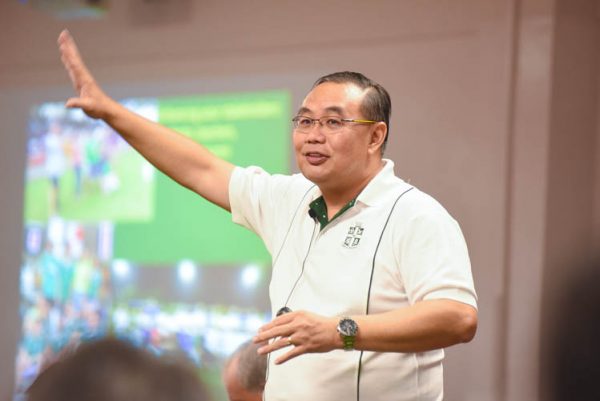 Can we change the name of our football clubs to schools’ names instead to inject new blood into the local football league? That was the radical question posed by Mr Bernard Teo, Saint Joseph’s Institution’s football teacher-in-charge.

“Can we change the S-League (clubs’) name? Can we call, instead of Geylang International, St Joseph’s International?” asked Mr Teo?

“Can we change Tampines Rovers to St Gabriel’s?” he added.

“Where there is a (football) culture there, where there is a ready base group of boys, group of fans, who might be supporting (the team in school) games, there are so many good schools playing football where they can create the same kind of atmosphere.”

The new series of talks was organised by the Football Association of Singapore (FAS) at the National Youth Sports Institute Satellite @ Kallang. The “Ideas for Change” event was meant to give local grassroots football leaders a platform to present ideas to various stakeholders who were present there, such as FAS technical director Mr Michel Sablon and Tampines Rovers’ chairman, Mr Krishna Ramachandra.

Mr Teo used the example of how the entire SJI was galvanised when they reached the National B Division Football final in 2015 and how the support from the SJI alumni played a big part in supporting the return of football as a CCA to the school.

“When we made the finals in 2015, the finals was in Changi (at Singapore University of Technology and Design) and there was not enough space to accommodate the whole school,” said Mr Teo.

“Our principal managed to contact the alumni and it was the first time that school soccer was streamed live and the rest of the school who couldn’t make it to the stadium watched the games live in the school hall,” added Mr Teo.

“The excitement, the cheering and the shouting, isn’t it fun, isn’t that great to see kids enjoy (football) together? Even though we lost six zero,” he added to laughter from the audience.

According to a 2015 Today news article, there were about 1,000 students who were watching the National B Division Football final at SUTD between SJI and Hong Kah Secondary School. At the National A Division finals, which are usually held at Jalan Besar Stadium, the crowd can reach 4,000.

But not everyone is convinced of the idea.

Mr Fabian Kwok, a former Gabrielite and Tampines Rovers player said rather than changing the name, S-League clubs should invite schools to be affiliated with the club.

“I think current clubs should work towards having certain schools around their area to be affiliated with them, instead of changing the clubs to certain school names,” Mr Kwok told Red Sports.

“At the moment, the current clubs represent a particular town in Singapore and maybe engaging the community in their respective town will provide a wider fan base rather than individual schools,” added the 27-year-old who currently plays for Hougang United.

Throughout the night, the idea of changing the clubs’ names to schools were picked up by other speakers during the event. Tampines Rovers chairman Ramachandra was open to the concept, saying that the idea “could work”.

“St Gabriel’s United right? Possibly instead of Tampines Rovers, or Montfort or Hwa Chong or De La Salle, yes it could work,” said the lawyer.

“But this point is very clear, there has to be a sense of belonging.”