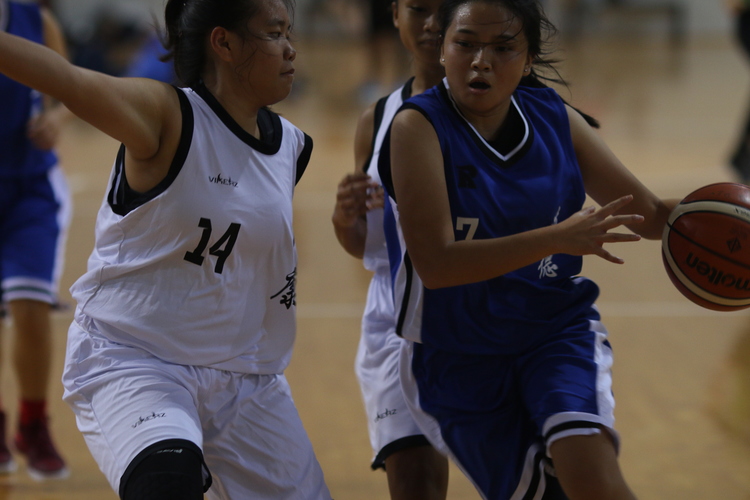 OCBC Arena, Friday, February 3, 2017 — Steady scoring from Seng Kang Secondary (SK) allowed them to secure a 35-20 victory over Riverside Secondary (RS) in the first round of the North Zone B Division Championship.

Seng Kang also won their first round games against Naval Base Secondary and Compassvale Secondary, losing 79-21 only to powerhouse North Vista Secondary. They will enter Round 2 as the second-place finisher from Group X.

Riverside had won 23-21 against Compassvale and 18-12 over Naval Base. However, they lost 5-63 to North Vista and this loss against Seng Kang marks the end of their season.

The game started off slow with both teams missing shots. However Seng Kang got into a rhythm halfway through the quarter. Apphia (SK #4) made two shots which gave Seng Kang momentum for the game.

Captain Wen Lin (SK #22) led her team with 13 points. She drove into traffic and made many shots after absorbing contact from the Riverside defenders.

Despite that, Riverside did not let up. They stepped up on the defensive end and caused several turnovers for Seng Kang during the third quarter.

Tee Hwei Xin (RS #7) made many baskets herself and had a game high 15 points.

Captain Wei Lin (SK #22) of Seng Kang said, “I think there was teamwork today and everyone strove very hard to get into the second round. We have won 3 games and lost one to North Vista and so there is still a lot of things to improve on – our skills, stamina, teamwork and passes.”