“If you would like to have more people in sports, you have to ask them what they like to do” – Dr. Johan Pion 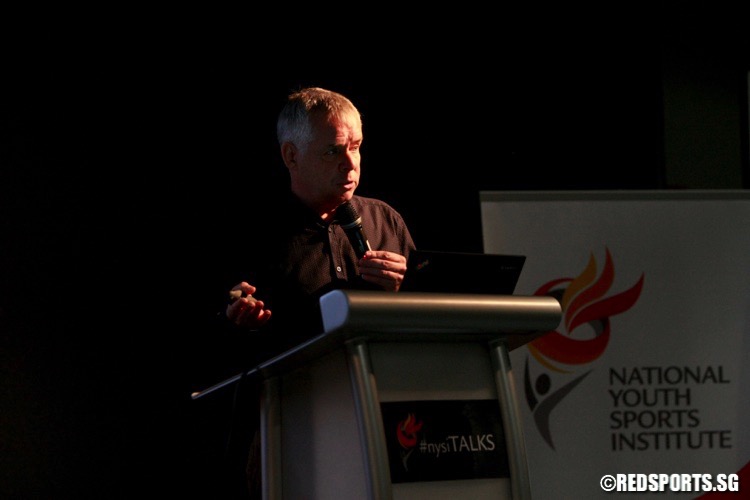 Dr. Johan Pion speaking at the 2016 Youth Athlete Development Conference. He is Head of Talent Identification and Development at the HAN University of Applied Sciences. He was sharing about how to predict sporting elite and minimise talent loss. (Photo 1 © Les Tan/Red Sports)

Your primary school children love sport but how do you find out what they are naturally talented at?

The Flemish Sports Compass can give you an accurate idea, said Dr. Johan Pion, the Head of Talent Identification and Development at the HAN University of Applied Sciences.

“Would it be possible to find the next Olympic champion in the playgrounds of our school? Therefore we made a tool – it’s called Flemish Sportkompas (Sport Compass). Flemish Sports Compass is a detection tool,” said Dr. Pion at the 2016 Youth Athlete Development Conference organised by the National Youth Sports Institute in November 2016.

What is the Flemish Sports Compass?

It is a battery of 22 tests that covers anthropometry (measurements and proportions of the human body), physical fitness, and motor coordination. The Compass tests for over 40 sports. Based on the test scores, the Flemish Sports Compass can predict with high accuracy what range of sports a young child will do well in.

For example, young children who showed better explosive lower limb strength were better in badminton and volleyball. Those who had better flexibility, were suited for gymnastics.

The tests also showed that young children who had better speed and agility excelled in badminton, judo, soccer and volleyball. Those with better upper body strength also were suited for badminton, basketball and gymnastics.

“I come from Flanders, the upper part of Belgium. We have approximately the same population size (6.41 million) as you have here in Singapore (5.67 million). We start very early to detect the better movers,” said Dr. Pion.

“So we have to be smart, we have to change. We have to make our advantage from our disadvantage. One thing we can do is, we are so small, we can test them all. They (China) can’t do that over there, so that’s a good thing,” he elaborated.

“If you would like to have more people in sports, you have to ask them what they like to do. And then afterwards, you hope that they can do it, and that they are the better movers as well. You can reach everybody with Sports Compass with ‘I Do’ and ‘I Like’,” said Dr. Pion.

When children know they can do well in a range of sports through these tests, that gives them the chance to try different sports, rather than specialising too early.

“Selection is also deselection at the same time. We have to think about how to provide growth development to those children. We have to give them more than only [just, say] gymnastics. Instead of working in one [sport] federation, we should cluster those [similar] sports. Then when we cluster it, it is easier for them to keep involved in sports similar to their sport,” said Dr. Pion.

Dr. Pion also shared how the Flemish Sports Compass is helping them succeed at Olympic level.

“If you do a detection, you can start to orient them 16 years before the Olympics. Talent detection, 16 years before podium. [Talent] orientation, to find out what you are good at, what do you like. Then we try to cluster the sports, then finally, try to transfer the talent [for a better chance of success in another sport].

“There is not a lot of money to help every sport, so you have to focus on the sports that are important within your country. And in Flanders, for example, we focused on 10 sports – athletics, swimming, gymnastics, judo, sailing, horse riding, tennis, hockey. We got six medals in Rio.

“We were lucky because we started top sports schools in 1990 so the system exists. And so I think here in Singapore your system will become better and better and in 20 years probably you will have six medals as well. I hope so for you,” he added.

“Another thing very important for the Ministry of Sport is if you choose 10 sports, you probably can be right, but some of them are not successful, and probably you will have two or three athletes where you don’t think they can have a medal. So you need some windows of opportunity [to transfer to another sport].

“It is important to start with talent detection 16 years before the podium. It is important to know what children like to do, what they are good at. It’s important to cluster sports to learn from other sports, to develop in the right way. And it’s important to transfer them, to have less drop out then we had before. It is not witchcraft, it is sports science,” concluded Dr. Pion.

You can watch Dr. Pion’s full lecture below.