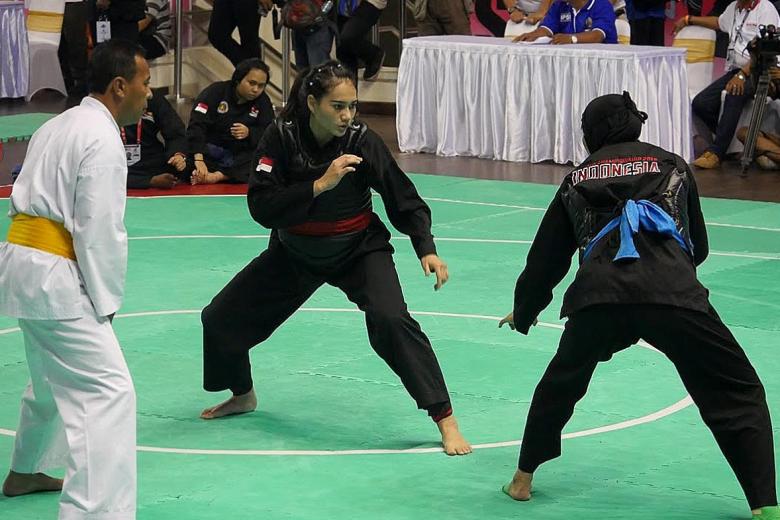 Almost two years ago at the last world championships in Phuket, Suhaila was a kick away from beating Selly for the gold medal in the women’s Class D (60-65kg) final.

But she ended up being dumped on the mat with a takedown in the final round and had to settle for a silver medal.

Yesterday, the 21-year-old Singaporean was again bested by Selly, this time in the Class D semi-final, and will return home with a bronze.

Singapore Silat Federation chief executive officer Sheik Alau’ddin told The New Paper in a phone interview that Suhaila was too hesitant in her approach.

“She should have gone in more aggressively,” said the two-time former world champion.

“When you fight against a fighter from the host country, it’s like you are fighting against gravity (because of the subjective juror scoring).

“You have no choice but to go all out all the way. But she hesitated a bit and was dropped to the mat early on.”

Suhaila, who was in tears, said she lost confidence early in the match because of the setback. But the 21-year-old vowed to bounce back.

“At the end, I lost by (points equalling) one or two kicks, so I’m really frustrated and disappointed,” she said.

“I went into the match pretty confident I could beat her this time but, after I lost a few points, I lost a bit of self-belief.

“I want to move on from this and pray for the best, and hopefully I can use this setback as motivation for my next competition.

“I’m eager to go home and start preparing for the South-east Asia Games (next August in Kuala Lumpur).”

Despite Suhaila’s defeat, six Singaporeans are still in contention for a gold medal in the tanding (match) category.

“It’s been good and it is not easy to have five athletes in the semi-finals,” said Sheik.

“The competition is gruelling and there are also more countries (41) than ever competing.

“We want all five to go into the final and, hopefully, go on and clinch the gold medal.”

For more sports news, go to The New Paper