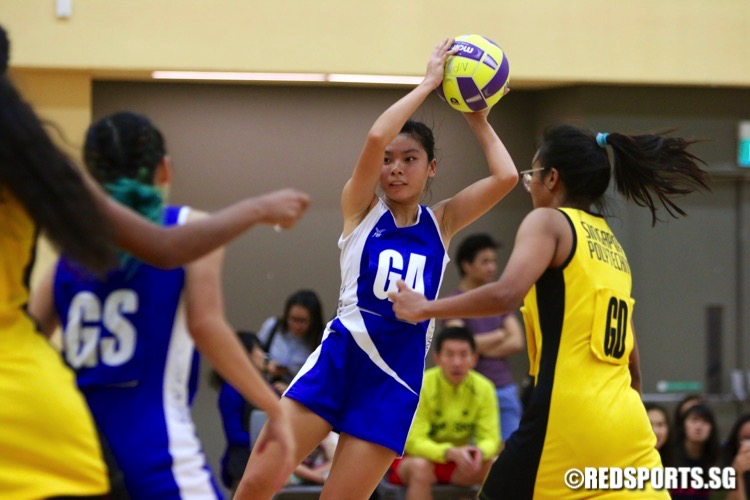 With a thumping 69-20 win over Singapore Polytechnic (SP), the girls in blue ensured that NP wrapped up their fourth Polytechnic-Institute of Technical Education (POL-ITE) Netball Championship in a row.

With Temasek Polytechnic and NP playing out a 41-41 draw the previous week, both teams had identical 3-1-0 win-draw-loss records heading into the final day.

Moreover, TP had a 24-goal difference advantage over NP before their final game against Republic Polytechnic (RP).

That meant NP needed to erase that 24-goal difference and score even more than TP to win the title in the event that TP beat RP.

By half time, NP hopes of wining the title were up as they built a commanding 35-8 lead over SP.

In the meantime, in a game played at the same time on the next court, RP were not rolling over for TP, and led 22-20 at half time.

With NP cruising to victory, TP and RP were trading points in a physical contest that enthralled a partisan crowd, and it was not until the closing moments that TP finally managed to pull away to win 46-41.

NP by then had finished off 69-20 victors over SP, their 49-point win more than enough to wipe out TP’s advantage and secure the title.

NP vice-captain Chong Shu Ting said, “I feel that our hard work has paid off. We trained really, really hard for this. There was stress (knowing that we had to score a lot). But we still had to play our best and ignore any worries, and play to the level we can.”

NP captain Evangeline Chia said, “For about seven of our players, they took to the court just this year. This is the first time we are playing together. We have done quite a good job.”

TP finished second in the championship with a 4-1-0 record.

TP captain Alicia Kwek said, “I think we didn’t start off very well (against RP). We had a lot of mistakes. Towards the end, we got more stable, and then we managed to catch up. I’m very proud of the team. There are five Year 1s in the team. First year together, and we managed to get second.”

TP vice-captain Petrina Chia said, “I’m proud of my team because even though we were playing a catch-up game from the start, but we weren’t bugged, we just went all the way. We really wanted it. It’s a pity we lost by goal difference. But NP played well for all their matches, that’s why they have a better goal difference.”

RP finished third in the championship with a 3-2 win-loss record.

RP captain Melissa Lau said, “Our best game of the tournament was this last one against TP. We really fought hard. We still tried to get the game back, even though time was not on our side.”

NP, TP, and RP qualified for the Institute-Varsity-Polytechnic (IVP) Netball Championship by virtue of finishing in the top three.