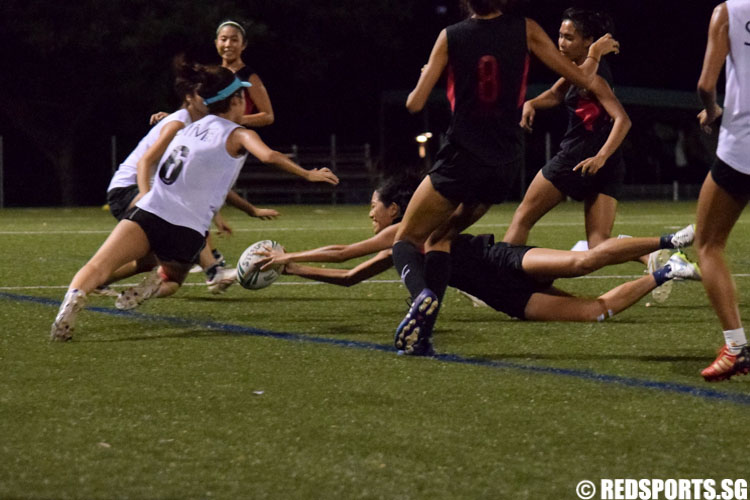 The two teams raised the intensity by a notch, giving the fans a treat.

Less than 2 minutes into the game, NTU scored the first touchdown on the far right through Eunice Liang (#2).

Unfazed, SIM responded almost immediately with a touchdown by Clarice Choo (#16). Shortly after, SIM increased their lead, capitalising on a misplaced pass by NTU to make it 2-1, courtesy of Magdalene Tan (#15).

Despite trailing, NTU had more possession and threatened to score on multiple occasions. A stubborn SIM defence ensured that NTU were constantly pushed back to 5m from the line.

When SIM regained possession, their swift attack drove NTU back. SIM were unable to convert their attacking prowess into points, as the half ended 2-1 in their favour.

NTU vice-captain Jasveen Sidhu (#8) said, “We played till the final whistle, played hard and there was no sign of disappointment. We just gave it our best,” when asked how she felt about trailing 1-2 during the break.

The second half was proving just as engaging when SIM increased their lead when Clarice Choo (#16) scored her second touchdown 2min 40sec after the restart.

Both sides had roughly equal chances. The difference, however, was in the number of misplaced passes, with NTU hitting seven, compared to two for their SIM counterparts in the second period.

With a stroke of brilliance, Isadora Soh (#5) of NTU took the ball and ran a good 20m, side-stepped her opponents to penetrate the SIM defence-line, before coolly finishing with a simple touchdown.

Although fatigue has visibly kicked in, both teams were not done yet. SIM captain Leow Sue Yee (#6) managed to save a poorly executed pass with her fingertips, kick-starting a string of passes finished off by Delfina Tan (#12) to put the game beyond NTU’s reach.

With only 5 minutes remaining, SIM looked to maintain their lead, adopting a cautious playing style. NTU, on the other hand, were not ready to give up yet and played to win.

SIM’s defence proved too tough for NTU to break and the home team bowed down to their worthy opponents at the final whistle.

Despite coming in second, NTU captain Deborah Liew (#17) was delighted with the team.

“I’m very very pleased actually. Even though we lost, I think our team got back [from Thursday’s game]. We didn’t ever think, at 4-2, it was impossible to catch up. We all just kept fighting. We didn’t give up on defence either. We gave our hearts out. So I’m really pleased,” she said.

SIM captain Sue Yee (#6) said, “I thought it was a lot on mental strength and perseverance. A lot of us felt very tired but [we] didn’t give up. We were encouraging each other really really hard at the side lines.”

SIM vice-captain Adelin Ang (#5) credited team play for their success, expressing that they were the weaker side in terms of fitness and skills. “We really worked well as a team. It was a very good job to both teams,” she said.