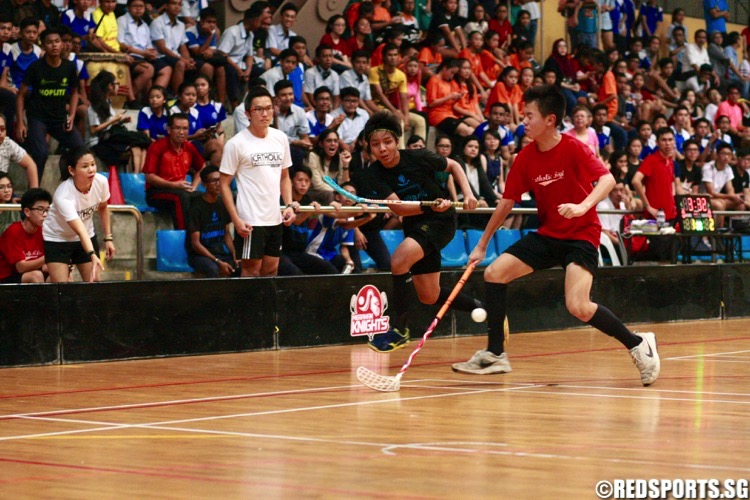 When the two teams last met in Round 1, Northbrooks had won 5-2. Northbrooks went the entire season undefeated before enduring their first defeat in the final.

To qualify for the final, Catholic High had beaten St. Gabriel’s Secondary 9-6 in one semi-final while Northbrooks saw off defending champions Victoria School 6-3 in the other.

Suraf Selvan (#6) opened the scoring in the 8th minute to give Northbrooks a 1-0 lead but the reply was immediate when Keanen Poon (#24) equalised in the next minute. However, it was Northbrooks who would walk off with a 2-1 lead at the end of the 1st period when Ryan Qusyairy (#24) scored in the 13th minute.

The two teams were scoreless in the second period as they cancelled each other out. Catholic High eventually got the equaliser they were looking for early in the 3rd period through Alvan Chan (#10) with just over a minute played.

Then came a power play opportunity for Northbrooks at the 8:25 mark when Catholic High had one player sent to the sin bin for two minutes. However, Northbrooks could not use their one-man advantage to score.

Then came the go-ahead and eventual winning goal with 4:37 left on the clock when Austin Teo (#17) saw his mid-court slap shot squirm under goalkeeper Na’im (#1) and hit the back of the net.

Catholic High finished the season with an 11-1 win-loss record, scoring 112 goals while conceding 42.

Alvan Chan (#10), captain of Catholic High, said, “What stood out for me about the final is definitely the winning goal. We were behind in the first period before we finally came back in the third period. So that was an important goal.”

On trailing 1-2 after the first period, Alvan said, “Some of us were a bit sad but most of us were determined to fight back.”

Keanan Poon (#24), vice-captain of Catholic High, said, “The Victoria match in Round 2 was memorable. Last year we didn’t manage to get out of Round 1, and we lost to VS. This year, we managed to beat Victoria (7-6). It was a tough match, but we managed to get through.”

Catholic High’s sole loss to Northbrooks in Round 1 was a low point in the season.

“Disappointed. Very angry with ourselves that we could not focus and win the game. And we played very badly overall,” said Keanan, recalling that loss. “After that we reflected, tried to work hard in our training to get to this place.”

Added Alvan, “[The game against Northbrooks] was our last game for Round 1. Although we were already through to Round 2, we wanted to win the game to top the table to have a better chance. I think it was the nerves because we knew Northbrooks were not going to be easy opponents.”

When asked how he felt about Northbrooks making their first ever final appearance, captain Na’im (#1), said, “I feel happy, but sad that we lost to Catholic High. Next year, we are going to train hard.”

On the best moment of the season for his team, Na’im said, “It was the semi-finals, when we beat Victoria 6-3 to qualify for the final.”