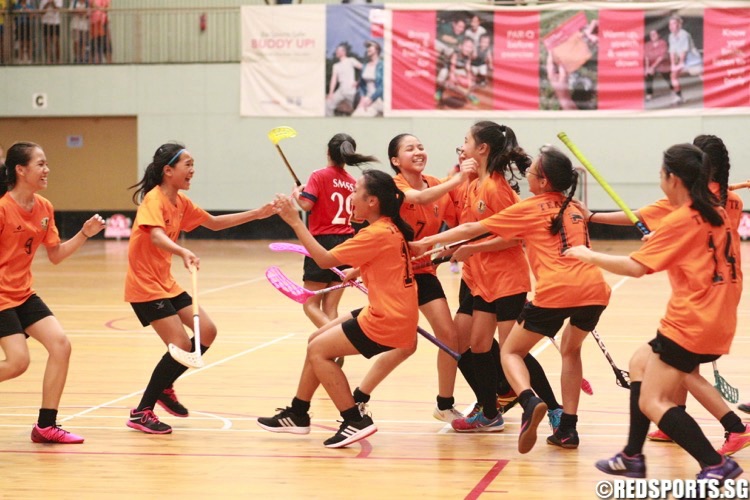 Glenna Tan (#12) was the top scorer of the game with four goals.

Tanjong Katong had beaten Coral Secondary 5-4 in one semi-final while St. Margaret’s over came Bukit Merah Secondary 7-4 in the other.

Tanjong Katong, who were playing in their fourth consecutive C Division final, have now won this championship three times since the floorball programme was introduced in the school in 2013.

In the playoff for third place, Bukit Merah and Coral were tied 4-4 after full time. Coral went on to win 2-0 on penalties.

For Tanjong Katong, the win is especially sweet as the school celebrates its 60th anniversary this year.

The two teams had met earlier in Round 2 and Tanjong Katong won that encounter 3-2.

Captain Natalie Low (#25) opened the scoring for St. Margaret’s 5 minutes in to make it 1-0 but Tanjong Katong equalised two minutes later through Nasha (#7). Both teams were tied 1-1 at the end of the first 15 minutes.

However, Tanjong Katong blew open the game in the second period with four unanswered goals with three goals from Glenna Tan (#12) and another one from Nasha (#7).

St. Margaret’s scored early in the 2nd minute of the 3rd period through Natalie Low (#25) but hopes of a comeback were snuffed out when Tanjong Katong scored two quick goals in the 11th and 12th minute through Haney Qistina (#8) and Glenna Tan (#12) to pull away to a 7-2 lead.

Paige Lee (#26) managed a consolation goal for St. Margaret’s just before the end.

“When we were down to two players and were up against four players in the third period for two minutes, it was very tough as they were trying to shoot non-stop. Unfortunately they scored one,” recalled Foo Wen Xin (#4), captain of Tanjong Katong, after the game.

“We felt that we could do better,” said Wen Xin, after the first period ended 1-1. “We were not used to this crowded atmosphere. It was quite difficult to adjust. We got used to the atmosphere in the second period. We knew we couldn’t communicate with each other (because of the noise), so we used our sixth sense to know where our teammates are.”

“The semi-final against Coral was the hardest game in the season. We were tied 4-4 with them until the last four seconds before we scored the winning goal,” added Wen Xin.

Taking a look back at the season, Hanis Humaira (#34), vice-captain of Tanjong Katong, said, “The first few matches in Round 1, we were not really into the game yet. But as we went along, Round 2, semis, final, we got better. We had bonding sessions. We had more chemistry. This (final) game compared to that Round 2 game against St Margaret’s is more intense. Both of our schools really wanted to win the championship.”

St. Margaret’s finished the season with a 9-2 win-loss record, their two losses coming at the hand of Tankong Katong. They scored 72 goals and conceded 29 in 11 matches.

Natalie Low (#25), captain of St. Margaret’s, said, “I’m happy that our team managed to get to the final. I’m glad that everyone has put in a lot of effort to bring our school glory even though we didn’t become champions. I think all of us are happy to get top 2 in Singapore.”

Nur Syahirah (#26), vice-captain of St. Margaret’s, said, “I think the semi-final against Bukit Merah was a highlight of the season. It was nerve-wracking. We worked so hard this season. The team spirit, the people around us, it encourages us to work for each other. We didn’t give up. Our mentality was there. We had our supporters from school and the bench.”