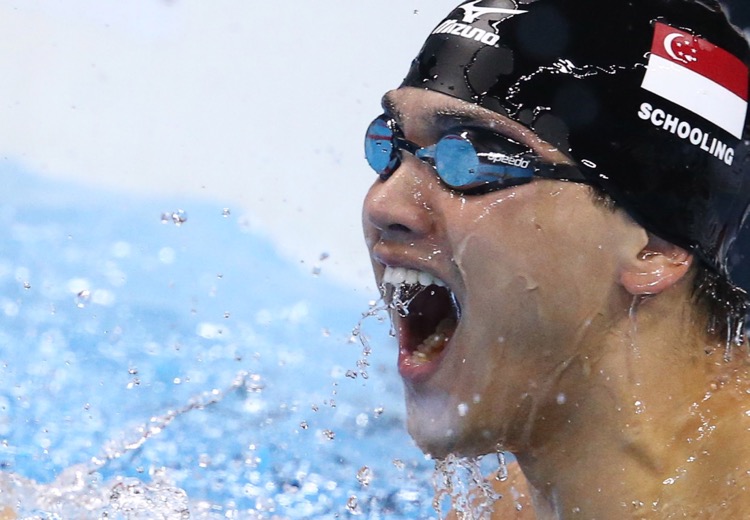 In doing so, Schooling pushed three-time defending champion Michael Phelps, 31, of the United States of America, into second. Phelps also found himself in a three-way tie for second with Chad le Clos, 24, of South Africa, and Laszlo Cseh, 30, of Hungary. All three stopped the clock at 51.14s.

This is the first time that Phelps has lost a major 100m butterfly race since Ian Crocker beat him at the 2005 World Championships. Phelps still holds the world record of 49.82s that he set on August 1, 2009, at the World Aquatics Championships in Rome.

“It’s crazy. It still hasn’t sunk in yet,” said Schooling at the press conference after the race. “I think I need a couple of days. I need to go back, chill by myself, away from the craziness of this, and just digest what has happened.”

The response to his gold medal has been overwhelming on social media and tributes have poured in for Schooling.

“It is an incredible feat to compete among the world’s best, stay focussed, and emerge victorious. Congrats once again to Joseph, you made us very proud today,” wrote the Singapore prime minister, Lee Hsien Loong, on his Facebook page.

When Phelps got a lot of questions at the same press conference, he graciously said with a laugh, “Joe (Schooling) should be getting most of the questions. This kid just won a gold medal, guys. Let’s ask him some more questions.”

“It’s up to him where he wants to take it. The ball’s in his court. As big as he wants to dream, as hard as he wants to work, to be able to do whatever is in his head. That will be really fun. I think that’s something I’m excited as a whole for the sport, to see where everything goes from here,” added Phelps.

Schooling is currently studying at the University of Texas at Austin and is a member of the Texas Longhorns swim team under Eddie Reese, a two-time United States Olympic men’s head coach.

Despite his historic win, Schooling’s admiration for Phelps was clear.

“Growing up, most swimmers idolised Michael. He’s the greatest. It’s only fitting to idolise someone like that. One gold medal’s nuts, I can’t imagine 22 or 23. That’s out of this world. If it weren’t for Michael, I don’t think I would have gotten to this point. I wanted to be like him as a kid. A lot of this is because of Michael. He’s the reason why I wanted to be a better swimmer,” said Schooling.

Phelps and Schooling were seen in conversation on the pool deck after the medal ceremony, and Schooling let on about what they talked about.

“After the race, I asked him, ‘Why don’t you go four more years?’ He told me, ‘No way, that’s not gonna to happen.’ After the race, when we did that whole victory thing, I was like, ‘Dude, this is crazy, I don’t know how to feel right now. This is out of this world.’ He just looked at me and smiled, ‘I know.’ He’s been through it all, and just being beside him, walking alongside him and celebrating, I will really cherish that for the rest of my life.”

With regard to the 2008 photo of him as a 13-year-old with Phelps that has been doing the rounds on social media, Schooling said, “Michael and the US team came to Singapore for a training camp in ’08 before they went to Beijing to acclimatise, and they came to the country club that I trained at. I remember I was doing my Chinese essay for school, and everyone rushed, ‘My God, it’s Michael Phelps! I want a picture with him!’ It was early in the morning. When I saw him, I was shellshocked. I couldn’t really smile. I just opened my mouth like … It was crazy. Looking back, it’s crazy what’s happened in eight years. I’m just honoured and privileged to have a chance to race alongside him.”

“I think this race means more to my family, and my friends, and those people that supported me. I did this for them. When you do that, when you race for people greater than yourself, it means a lot when you accomplish what you wanted to,” said Schooling.

“It means a lot. It was a tough road. A lot of pressure. You got to learn how to manage that. It wasn’t easy. It was really hard. First one through the wall, things always get bloody. I was blessed and privileged, thankful that I could accomplish the things that I wanted to, dreamed of as a little kid.”

“I hope this paves a new road for sports in Singapore. I hope it opens a lot of doors. I hope this shows that even people from the smallest countries in the world can do extraordinary things. Hopefully it changes our sporting culture and our mindsets towards sports,” added Schooling.

Schooling is also the first South-east Asian athlete to win an Olympic gold medal. Filipino Teofilo Yldefonso won a men’s 200m breaststroke bronze at the 1928 Amsterdam Olympics and compatriot Simeon Toribio did likewise in the same event at the 1932 Los Angeles Olympics.

Phelps was denied a 13th individual, and 23rd Olympic gold. Despite that, he looked a man at peace with himself and the world, generous in spirit, congratulating Schooling immediately after the race, and was smiling and chatting with Schooling as they walked around the pool deck for a victory lap.

This race was billed as the King vs the Kid and this was the last individual Olympic race for Phelps. His time as the king seems to be over.

Hail to the kid.