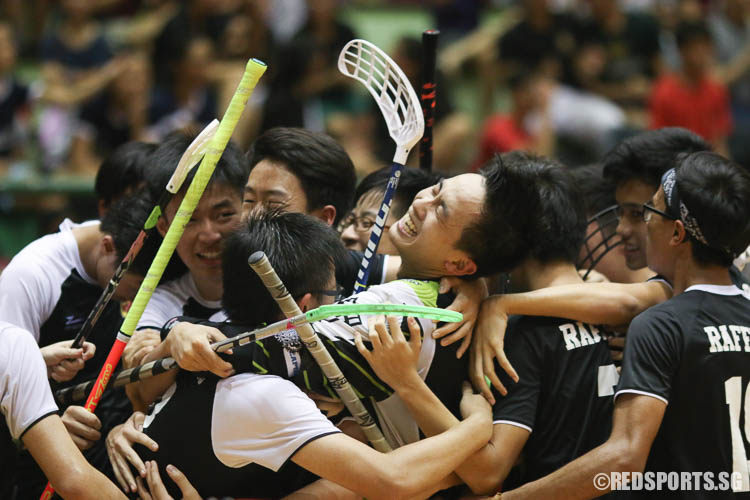 Said RI’s Haziq Rased (#29), “I feel very, very happy for my team, because we trained very hard, no one knows how hard we have trained for this competition. Our coach told us to not give up, and we just fought till the end. God willing, we managed to retain the title.”

“I’m also happy about my performance because I did not play well for my previous game against VJC in the semi-final. This is my last match of my whole six years as a Rafflesian, so I feel great as I feel like I played well – I did not lose the ball too much, I created a lot of chances, and assisted the winning goal.”

“We faced a lot of challenges (en route to retaining the title), like having the mindset that we are defending champions. For example, in the semi-finals we were afraid of losing – we were under pressure because we wanted to retain the title so badly until we didn’t play our original game plan. That was why we didn’t play as well in the VJC game, but then today we just enjoyed our game.”

The familiar foes met again, this time in the final, with both in ruthless form. Each side had a perfect winning streak over seven games prior to the final, with RI banging in 66 goals and conceding seven, while MJC scored 63 and let in six.

Right from the get-go, high-octane floorball was on full display in the final as both teams played with much vigour. This was coupled with deafening cheers from both sets of supporters which reverberated around the sports hall throughout the entire game.

Every loose ball was chased down as if the players’ lives depended on it, while aggressive interceptions were aplenty which saw many players falling over and fouls being called.

RI’s best chance in the opening exchanges came from a free-hit – Haziq’s (RI #29) strike from way out was parried by MJC custodian Lutfi Nur Hakim (MJC #86), as Silas Choe (RI #11) prodded the wall just wide of the left post.

Jeremy Chia (MJC #18) then tried his luck from mid-court, but the ball went straight into goalkeeper Jared Tan’s (RI #71) hands.

Three minutes to the end of the period, Haziq (RI #29) darted forward on the left flank then audaciously cut it back to Tng Zong Wei (RI #88) in the middle, but the latter’s shot went marginally wide.

Silas (RI #11) then unleashed a drag shot from outside the D area, but it agonisingly struck the post instead.

Muhammad Jazli (MJC #21) also tested Jared (RI #71) from long range, but the goalkeeper pulled off a decent reflex save.

In several instances, Abdul Mateen (MJC #4) showed off his silky stickwork, juggling the ball in mid-air to evade his opponents.

The first period ended goalless, but the plethora of chances indicated that the game was not going to end that way.

The second period took off with a similarly high tempo. Just 30 seconds in, MJC captain Thaddeus Tan (MJC #77) let fly a drag shot but it bounced off the crossbar, as the Meridian faithful held their heads in disbelief.

Silas (RI #11) also dragged a low shot from far out, but was blocked away by goalkeeper Lutfi (MJC #86).

Then four minutes in, Thaddeus (MJC #77) received a two-minute penalty for a foul. RI approached the power play situation in a steady manner, patiently building up from the back of court and waiting for the right moment to strike.

A minute later, things were made worse for MJC as Mateen (MJC #4) also received a two-minute penalty, and MJC were down by two men.

RI duly took advantage just three seconds after. Receiving a teammates’s lay-off from a free-hit, Ryan Tan (RI #68) struck a low slap shot from mid-court which found the back of the net, giving RI the lead.

MJC hit back, with a flurry of chances thereafter in search of the equaliser. Right after returning onto court, Thaddeus (MJC #77) tried slamming a low shot but it got deflected away by an RI stick.

Jayvis Lim (MJC #25) then stole possession of the ball in his attacking half, and with only the goalkeeper to beat, he struck the ball over the crossbar.

Jeremy Chia (MJC #18) also had a couple of striking opportunities from long range. The first one went over, while the second was a drag shot which was brilliantly kept out by goalkeeper Jared (RI #71).

Then with 2:27 left on the clock for the period, MJC earned their reward from an RI defensive calamity. Janus Lim (MJC #22) stole the ball from Lim Yi (RI #12) right in front of goal, before swiftly sweeping it past Jared (RI #71) to make it 1-1. The MJC crowd roared in approval.

With 1:40 left, MJC had a chance to take the lead when Mateen (MJC #4) burst forward in a fast break before passing to Shahrul Amsyar (MJC #9), but the latter’s shot was saved point-blank by Jared (RI #71).

Just before the end of the period, Jazli (MJC #21) slammed the ball low from the left using the reverse blade of his stick, but Jared (RI #71) was once again equal to the task.

The two teams remained locked with a goal apiece, as they came out with renewed grit in the final period with all to play for.

Four minutes 14 seconds into the last period, RI took the advantage. Haziq (RI #29) gained possession in mid-court before scurrying forward on the left. With defenders applying pressure, he cut the ball back to Zong Wei (RI #88) in the middle to slot it in confidently with a first-time finish, cueing rapturous roars from the Raffles crowd.

A minute later, Foo Jun Wei (RI #17) tried dribbling his way in his own half before losing possession to Mateen (MJC #4), but the latter’s strike went wide on the right.

MJC launched onslaught after onslaught, but RI held on with last-ditch interceptions and more heroics by Jared (RI #71).

The clock was stopped eight seconds from time, as a time-out was called with MJC being awarded a free-hit. The Raffles supporters held their breaths for the nail-biting last few seconds, before erupting in ecstasy when the final buzzer rang out.

Said RI custodian and captain Jared (#71), “I think the team did really well, because in the semis, we sort of crumbled under pressure and we didn’t play the way we were supposed to play. But thankfully today, the team really rallied together, and followed what our coach had to tell us. So we just followed the game plan, and it worked miracles.”

On clinching RI’s third title in a row, he remarked, “I don’t think it’s only about my batch or this team, it’s also about previous batches; we are really privileged to have great seniors who teach us every year, which helps the team really improve as a whole together. As a batch, even though we might not have come out that strong in Sec 4, but I think in J1 because of a great batch of seniors and a really fantastic, world-class coach, the team has managed to up our game to the next level.”

He added, “I’d really like to thank all the supporters for rallying behind the team, without them it’s really not possible. Also all the parents, teachers and our coaches Jill Quek, Tan Lee Leng, Lim Jin Quan and Benjamin Quek. And ofcourse lastly I thank God for helping this become possible.”

In the third/fourth placing match earlier in the day, VJC beat ACJC 4-1 to clinch the bronze.