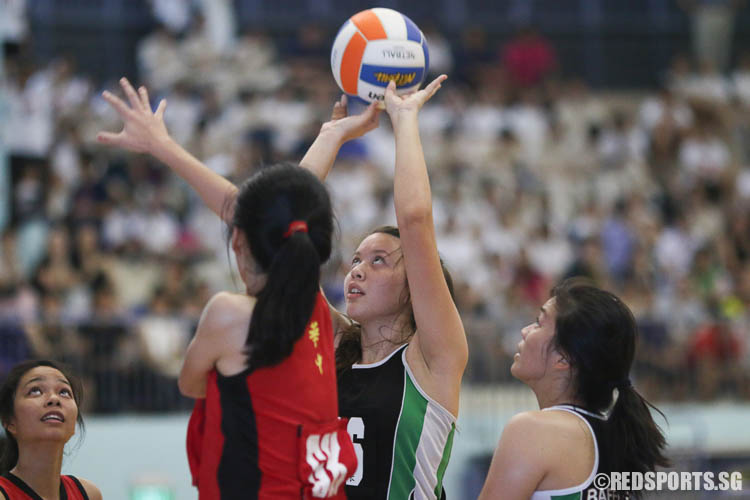 When the two finalists last met in Round 2 of the competition, undefeated RI narrowly edged the tie 58-50. That remained HCI’s only loss in the campaign prior to the final.

The final started off in a similarly cagey manner, before RI eventually pulled away in the final two quarters.

RI’s superiority in offense was largely attributed to Goal Shooter (GS) Isabelle Belanger’s towering presence in their attacking semi-circle, as HCI’s Goal Keeper (GK) Low Yixuan and Goal Defense (GD) Karyn Tshua had a torrid time trying to intercept any lobs that were directed towards her.

Isabelle (RI GS) sunk 50 of her 65 shots into the net for a 76.9 percent conversion rate. Even though RI’s Goal Attack (GA) Valerie Shao had fewer shooting attempts, she was as ruthlessly efficient, converting 18 of her 24 attempts (75%).

The most prolific shooter on court, though, was HCI’s GA Isabelle Wang, who scored with 18 of her 22 shots (81.8%). She racked up half of HCI’s 12 points scored in the first quarter, as HCI kept the game tight to trail by only four points (12-16) going into the second quarter.

While Claire Seah (HCI GS) only had a 51.2 percent conversion rate (22/43) for the entire game, her similarly towering height was enough to trouble RI’s Jane Yu (GK) and Ayshath Zaseela (GD), as she often got on the end of long lobs to either go for the hoop herself or lay if off for Isabelle Wang (HCI GA).

At the start of the second quarter, RI brought on Nadia Quek to replace Jane Yu at GK, presumably to inject more physical presence in their defensive semi-circle to counter Claire’s (HCI GS) threat.

The tactical switch took awhile to pay dividends, as HCI continued putting in a tenacious team effort and switched to a more aggressive game play, keeping RI on their toes. RI still edged out HCI 15-12 in the second quarter to hold an overall seven-point advantage (31-24) at the halfway mark.

Alas, tired legs proved to be the downfall for HCI as a more physically-conditioned RI outlasted them in the last two quarters. RI’s Centre (C) Angelina Lim and Wing Attack (WA) K S Farhana displayed great agility in the middle of court, dictating play with incisive runs and swift passes.

Isabelle Belanger (RI GS) had her best outing in the third quarter, as she scored with 11 of her 12 shots. Valerie Shao (RI GA) also had her groove on, converting 6 of her 7 attempts as RI outplayed HCI 17-10 in this quarter, and pulled away to 48-34 overall going into the final 15 minutes.

In the final quarter, RI switched gears and extended their advantage further, as HCI struggled to match up to their fitness levels. Claire Seah (HCI GS) had a quarter to forget, converting only 4 of her 12 shots, as many HCI scoring opportunities went begging.

On the other hand, Isabelle (RI GS) contributed 15 points and Valerie (RI GA) chipped in with another five, as RI dispatched HCI 20-6 in the last 15 minutes to eventually emerge comfortable victors with a more flattering 68-40 scoreline.

On her team’s performance, RI’s Isabelle commented, “I felt that coming onto court, we were all ready to give it our all. We were just ready to put in everything that we had – everything that we practised this whole season – and leave it all on court today. All of us had a peace of mind going onto court, we were all just ready to perform our best. We gave it our all, and I’m very proud of how far our team has come this whole season.”

“Even though we might have won by a fairly (big) margin, I feel like we didn’t give up the whole match. We really just wanted to give it our best no matter the score and I feel that we managed to achieve that,” she continued.

On retaining the title, Isabelle remarked, “Personally, this is my second year playing in the final, and coming into the final for the first time last year was really an amazing experience. I came into the final this year expecting the same energy from everyone, and I was super, super proud of my team when we won, I feel like all of us have worked really hard this season to make this happen.”

She added, “I want to thank our coach, Ms Chng, and the support from our seniors who came down to train with us. I also really want to thank my teammates for being so supportive of me and the whole team for being so supportive of one another. We really pushed each other to do our best, and our coach really helped us through this journey, like correcting our mistakes, and helping us improve and be the best players that we could be. I’m really thankful for everyone who came down to support too, and everyone else who has helped us along the way.”

In the day’s earlier game, ACJC edged past RVHS 32-27 to claim third position.