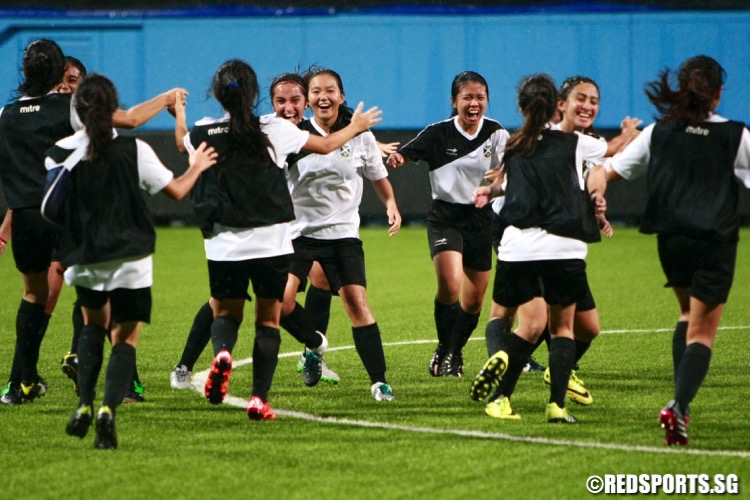 After 100 minutes of open play, the teams were inseparable at 0-0. MJC dominated the game but SAJC defended strongly to force the game into penalties.

Both teams had a similar run of form, registering two wins, two losses and one draw over the last five matches. MJC lost 3-1 to defending champions Victoria Junior College in their semi-final while SAJC suffered a 1-0 loss to Raffles Institution in the other.

MJC entered this game boasting superior a goal difference, scoring seven goals and conceding five over the course of the campaign. On the other hand, SAJC had scored four and conceded nine.

The match began with MJC on the front foot. With two goal attempts within the first five minutes.

The first came from a through pass made by Elvina Chun (MJC #11) to Liyana Bte Juraimi (MJC #14). Liyana was clear on goal, but was put off balance as her shot went wide of the target.

Liyana Bte Juraimi (MJC #14) was responsible for the second effort as well when she chased down a ball in the SAJC’s penalty box. The shot from a tight angle lacked accuracy.

MJC dominated the first 10 minutes, enjoying a large part of the possession. SAJC failed to register a shot at goal as they struggled to penetrate the MJC defence.

Siti Mariam (MJC #21) displayed impressive skill on the left wing as she dribbled past her opponent with ease.

Despite the relentless MJC attacks, the SAJC defence stayed compact to maintain the clean sheet, and looked to attack on the counter.

Elvina Chun (MJC #11) was a real force in the midfield, showing immense ball control and passing ability. She created more chances than any other player on the pitch.

SAJC improved their gameplay, and tested MJC’s resolve with a series of dangerous passes around the MJC penalty area.

Daphne Velmonte (SAJC #13) had her team’s best opportunity in the first half when she collected the ball behind MJC’s defence and released a shot that drifted away from goal.

The first half came to an end at 0-0, defined by both team’s wastefulness in front of goal.

The second half got underway after a delay caused by the lightning alert.

MJC had a golden opportunity when Alicia Ng (MJC #15) escaped her markers and only had the keeper to beat. SAJC goalkeeper Phoebe Lai (SAJC #22) rushed forward bravely and blocked the shot, keeping her team in the game.

Saranya Thiru (SAJC #4) then made a darting run down the left wing but failed to put in a cross worthy of her dribble.

SAJC goalkeeper Phoebe Lai (SAJC #22) made another vital save when she sprinted to the edge of the penalty box to deny striker Rachel Ho (MJC #23) of a chance. Her goalkeeping heroics saw her go down injured, but she was back on her feet after treatment.

Elvina Chun (MJC #11) had a few efforts from range, as MJC took the more direct approach in breaking down the SAJC defence.

The game went into extra time after another lightning delay. A massive scramble in the box saw SAJC block several MJC shots, with Alicia Ng’s (MJC #15) effort deflected out for a corner.

Siti Mariam (MJC #21) put the ball into the goal late in the first half of extra time, but it was disallowed for offside.

Neither side looked likely to score the winning goal as the flooded pitch made it difficult for the players to control the ball.

Constanza Tan (SAJC #18) then skied her effort over the crossbar, before Elvina Chun (MJC #11) placed the ball in the top right corner to make it 1-1.

Nurulhana Neubronner (SAJC #8) and Ong Li Ying (MJC #3) both scored their penalties, side-footing the ball into the bottom left and right corner respectively, leaving the score at 2-2.

SAJC captain Valerie Sung (SAJC #9) then put the pressure back on MJC after dispatching her penalty with ease. The turning point came when Siti Nur Azmina (MJC #25) missed her penalty. Phoebe Lai’s (SAJC #22) save left SAJC just one penalty away from winning the game.

Neo Ting En (SAJC #11) stepped up and shot the decisive spot kick down the middle. The ball slipped through the grasp of goalkeeper Liyana Bte Juraimi (MJC #14) grasp and into the goal to seal the 4-2 win.

SAJC skipper Valerie Sung (SAJC #9) said, “The game was tough. MJC is very good and they are known to be a formidable team. So we decided to go in with all our heart, without fear since it is our last game. We just went all out to play how we usually play, to go for every ball and try to close them down.”

“I think it was a good thing that we managed to get to the penalties, because they were dominating in the game. The timing was just right, because if their morale kept going up and our morale kept going down, it was not going to be in our favour,” she added.

On how the lightning delay affected their game, she said, “I believe the additional time did help us especially because it was very hot in the first half. So the extra rest time did help us to recover more and get back to the second half with more energy. We also had more time to talk about where we needed to work on and were more assured as to what we were doing and what we had to do.“

When quizzed on her future goals, Valerie said, “I would like to strive to become a better player. If possible, I want to keep playing Football, be it in University or for an external club.”

In a message to her teammates, she said, ”Coming from a team that started nowhere, I am just so proud of what we have achieved today.”