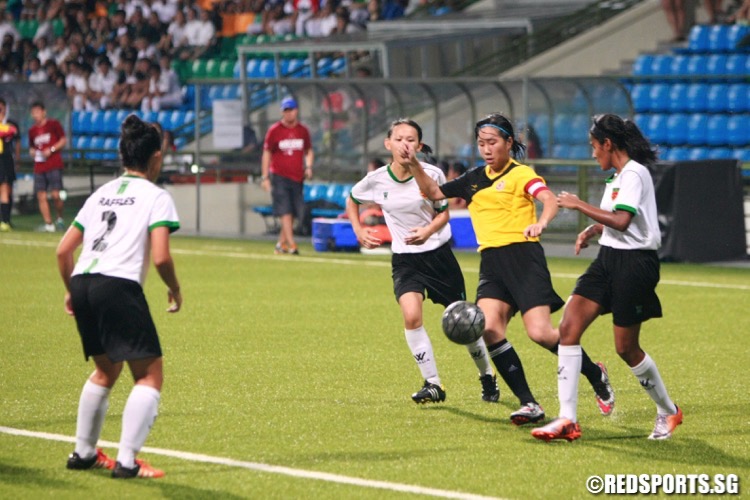 Rachael Fujisawa of VJC on the attack. She finished as the top scorer of the championship with 18 goals. (Photo 1 © Les Tan/Red Sports)

It is VJC’s fourth title in a row, and their eighth in the last nine years. RI had won it in 2012.

Going into this final, VJC had a 100 percent win record over five games. Their superiority in offense and defense was also second to none, as they scored a whopping 53 goals and conceded just one en route to the final.

In comparison, RI won four and drew one, scoring seven goals and conceding once.

Captain and playmaker Rachael Han Fujisawa (VJC #6) was at the heart of every VJC attack, from incisive long balls to creating chances with defense-splitting passes.

Similarly, Rachael’s opposite number Goh Ming Wei (RI #10) played an essential role in every RI move. The RI captain was the fulcrum of her team, from taking the goal-kicks to delivering set-pieces. She was also once the basketball captain for Raffles Girls’ School.

As early as the fourth minute, VJC threatened to bulge the net. Rachael (VJC #6), comfortable with both feet, sent a dangerous left-footed cross from the right wing. Teammate Chelsea (VJC #21), who also plays basketball for VJC, prodded the ball just wide of the right post.

A minute later, Rachael (VJC #6) – who also came in sixth in the shot put at last month’s 57th National Schools Track and Field Championships – unleashed a long-range strike which RI custodian Amber Voo (#22) managed to keep out using her feet.

On 17 minutes, Rachael (VJC #6) once again tested the goalkeeper with a long drive from way out of the penalty box, but Amber (RI #22) was equal to the task.

VJC almost broke the deadlock thereafter when Rachael (VJC #6) sent another pin-point delivery across the field to Lynn (VJC #7) on the right, who could only lob the ball over the bar.

Ng Hui Ling (VJC #5) and Chelsea (VJC #21) then had a good inter-play in the middle of the pitch, with the latter trying to dribble her way through RI’s defense. Ming Wei (RI #10) tracked back to claim back possession.

At the 22-minute mark, the floodgates finally opened.

RI managed to clear Rachael’s (VJC #6) corner kick, but she soon stole the ball back from Alyssa Deanna (RI #23) on the right wing. After some nifty footwork, Rachael delivered a cross into the six-yard box. Chelsea (VJC #21) tried to head the ball into goal, but RI goalkeeper Amber (RI #22), in an attempt to gather the ball, inadvertently kneed it into her own net.

Soon after, VJC doubled their lead.

Winger Lynn Teoh (VJC #7), who, like Rachael, is also a thrower – she claimed the javelin gold and discus bronze in the aforementioned championships last month – managed to outmuscle her opponent on the right flank and sent a rapid low cross in. Winette Lim (VJC #3) received the ball on the opposite flank before unleashing a left-footed finish which flew into the roof of the net.

VJC had a glorious chance to extend their advantage thereafter. After good work from Rachael (VJC #6) on the right flank, Chelsea (VJC #21) met her cross but her shot from just a few yards out went over the crossbar.

Chelsea (VJC #21) then missed another opportunity when, after getting on the end of a lobbed through-ball by Lynn (VJC #7), her left-footed strike was saved by Amber (RI #22).

Shortly after, Lynn (VJC #7), who is also a former B Division girls’ javelin record-holder, found herself one-on-one with the goalkeeper but Amber (RI #22) scurried forward and gathered the ball.

Then, against the run of play, RI earned a free-kick from a VJC handball just outside the penalty box. Ming Wei (RI #10) let fly a crisp shot that VJC custodian Chloe Tan (VJC #2) could only palm upwards, only to see the ball go over her and into goal.

It was only a minute before half-time then, and RI had reduced the deficit to one goal with their first shot on target.

But before RI could begin rallying forward for the equaliser, VJC restored their two-goal cushion (3-1) immediately through centre-back Low Sze Min (VJC #17), who hit a magnificent drive from way outside the penalty box that gave Amber (RI #22) no chance.

Five minutes into the second half, VJC made it 4-1. With some deft footwork, Chelsea (VJC #21) weaved her way through the RI defense and slotted it past Amber (RI #22).

RI’s best attempt came five minutes from time when Alyssa (RI #23) darted down the right wing, before crossing into the six-yard box. Huai Chin (RI #13), however, could not make contact with the ball. Alyssa (RI #23) subsequently went down with a leg cramp as the Raffles supporters applauded her for her spirited showing.

The referee eventually blew the final whistle, and the VJC faithful, who had stayed back despite a two-hour delay due to lightning risk, erupted in ecstasy.

Despite the defeat, the RI players huddled together after the game in unfaltering unity.

On her team’s performance, VJC captain Rachael (#6) commented, “We actually came into this game knowing that we had a couple of players down with injuries, and a lot of us were actually down with illness; I myself had a fever last week. So our semi-final was more of a challenge than we expected it to be, and we overcame it.”

“But today’s performance from the team was really, really heartwarming – every single one of them continued running even when both my legs gave way and I had to go down with a cramp. This also happened to me last week, and we all agreed together that we would fight to the end as a team and we would die as a team. This is really the best feeling I have experienced and I feel really thankful.”

Rachael claimed the top scorer of the tournament award with 18 goals, but was adamant that it was an entire team’s effort.

She said, “Scoring goals, no matter how many goals you score – that’s not the most important thing. The most important thing is that we came out after every match knowing that we fought the hardest for one another, and I feel like in this game we managed to show that every single one of us did that. I don’t count goals or whatever – I mean even in this final, I didn’t score a goal but I’m still just as 100 percent contented and really satisfied, and I’m very proud of every single one of my teammates.”

Interestingly, Rachael had scored at least once in each of VJC’s five games prior to the final, except in the final itself.

She added, “Actually, we also want to dedicate this win to one of our players, she’s a J1 DSA girl called Ayushi – she tore her ACL during the semi-final. She gave us the two goals that we needed to get into the final.”

Ayushi Anand (VJC #22) was the overall second top scorer in the tournament with 10 goals.

Rachael also acknowledged her team’s support network. “Firstly, we have to thank the people who have supported us from the very beginning; there’s our coach Mr Lawrence Lee and our teacher-in-charge Mr Tan Yew Hwee. But on top of that, we really want to thank all the people who have come down not just for this match, but every single match.”

“Even today, people have SPA the next day, they are sacrificing their revision to be here. So all these people, they are giving a lot to be here just to support us to the very end, to make sure we bring back the trophy. So I think that’s very, very heartwarming. And ofcourse we’d like to thank the principals, head of management, and all the people who are here to help us take videos, take photos. And not forgetting our parents.”

Meanwhile, RI captain Ming Wei (#10) insisted her team had every reason to be contented. She said, “I’m very proud of each and every one of them. As in, I’ve seen how they were when they first started playing football, and I think that they’ve progressed a lot. This achievement, I feel, is really something to be proud of.”

“For us, we missed out on the trophy, yes, but I think that the journey we had together is worth just as much, or even more,” she continued.

Paying tribute to those who walked through the journey with her team, she added, “I would like to thank Mr Leong, Mr Sulaiman, and Mrs Chin – our coaches and teacher-in-charge – for always being supportive of us and never giving up on us no matter what. They really have a lot of belief in us, and they teach us so many things, not just football, but other things in life too. They are just really amazing people.”