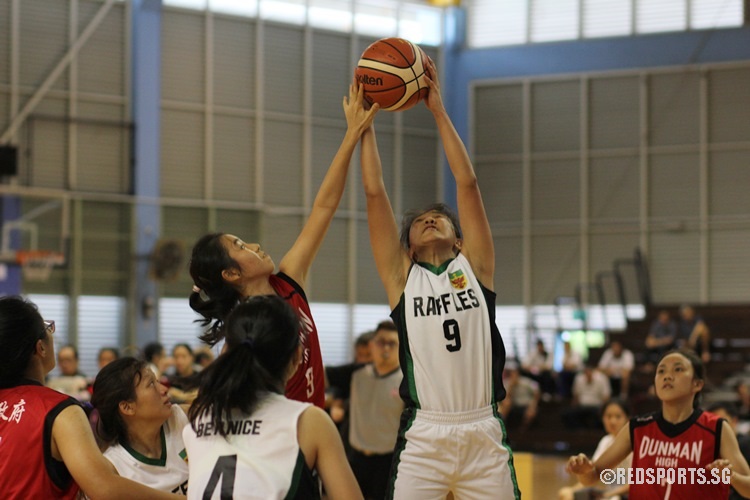 This is RI’s first win of Round 2 after coming out top in their Round 1 group. This improves their win-loss record to 5-0 while Dunman High drop to 3-2.

From the 1st quarter, RI played a tight man-to-man defense which made it difficult for Dunman High to drive in and score. Coupled with the success of their defensive rebounds, RI were able to pull away from Dunman High.

While Dunman High played an aggressive man-to-man, RI had the advantage of taller players. Hence, they were able to score their lay-ups and their offensive rebounds.

RI also played a full court defense which allowed them to intercept passes and score on their fast breaks. While Dunman High were able to penetrate the RI full court defense a few times, they were unable to convert them into baskets.

To counter the RI defense, Dunman High began passing around the ball more often. However, they used up the shot-clock and turned over the ball. RI led 28-3 at halftime.

Dunman High found more success with their short-range attempts in the 3rd quarter. At the same time, RI were able bag their defensive rebounds and score on their fast breaks to outscore Dunman High 18-9 to lead 46-12 heading into the 4th quarter.

Dunman High also began playing a full court defense in an attempt to intercept RI passes. This tactic only had some success as RI were able to penetrate their defense and score their lay-ups.

While Dunman High continued to score their short-distance attempts, they were unable to overcome the large deficit and RI took home the 62-23 win.