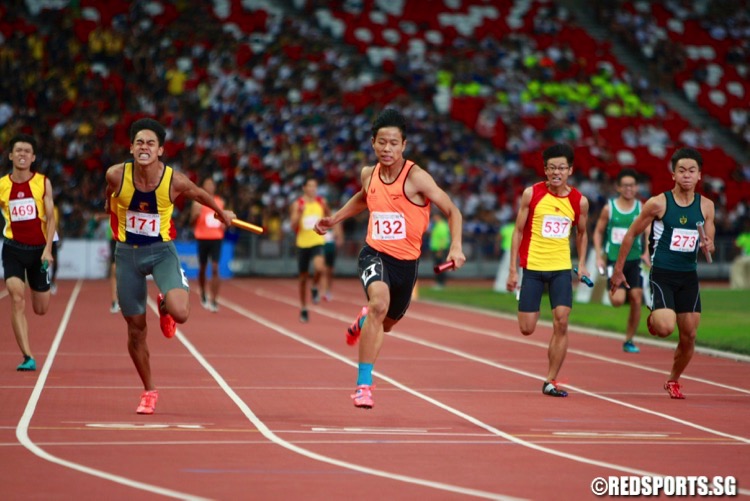 ACS(I) finished 0.09s ahead of SSP in the semi-finals, but found themselves 0.12s behind in the final.

This is the first time that two teams in a B Division boys’ 4x100m relay final have both timed below 43 seconds, ever since 2010.

Apart from SSP and ACS(I) this year, only three other B Division relay teams have ever gone under the 43-second mark – ACS(I) and Hwa Chong Institution in 2010, and SSP in 2015.

The electronically-timed record for this event continues to stand at 42.41s, clocked last year by SSP themselves. This year, they were 0.31s away from matching the record.

SSP’s first runner, Hafiz, was on par with the other competitors at the start. along the straight, second runner Shawn started to pull away along with ACS(I) and RI.

SSP’s third runner, Wei Guan, raced down the curve, neck and neck with Shaun Choo of ACS(I) before handing over to Marcell who edged just ahead of Joshua Lim of ACS(I) to cross the finish line in first place.

After the race, Marcell commented, “It was a very intense and close race but we were determined to win and we eventually won. However some of our passes weren’t that good so we knew we could have done better if we had good passing.

“And I’m not really fit as I fell ill a few days before today and I’m not fully recovered. We have worked together for months to perfect our passing and chemistry between our team.

“It’s great that we are able to hit our PB this time in the National Stadium with such an amazing crowd. I’ll definitely miss running with this team, as we pursue higher level education.”

Wei Guan added, “We wanted to get a good first 3 legs to secure a gold at the final leg. In the end, we just wanted to give the crowd a great show and just ran the whole thing as hard as we could.”

On future goals, he added, “I hope I get into the national team and continue to pursue track like the hurdles. After today I feel much more motivated to go far in the sport and I want to represent Singapore in major games.”