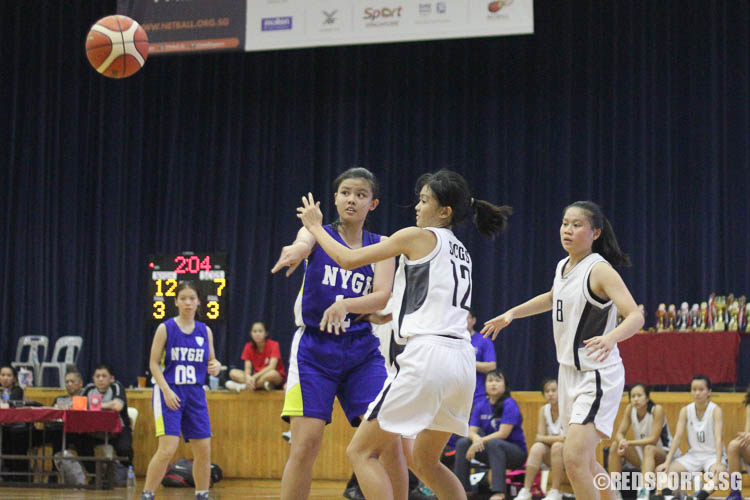 This is the third time in the last five years that Nanyang Girls’ have qualified for the National B Division final.

This title win is the seventh National B Division Championship the school has won. This matches Mayflower Secondary, and is four behind Jurong Secondary who have won 11 B Division titles in their history.

NYGH held SCGS to just one point in the second quarter and that proved crucial in the win.

SCGS had remained undefeated in the Nationals coming into the Final while Nanyang Girls’ had a 6-1 win-loss record. Their sole loss had come at the hands of SCGS in Round 2.

However, SCGS also gave as good as they got, blocking many of Nanyang’s drives in. They also played a full court defense to make it difficult for their opponents to make accurate passes.

The few instances when both teams were able to penetrate each others’ defense saw SCGS take a low-scoring, slim 6-5 lead at the end of the first quarter.

The second quarter saw both teams bagging their defensive rebounds but not converting them into points. The teams went scoreless for the first four minutes until a free throw plus a lay-up by Glades Tan (NYGH #4) finally gave Nanyang Girls’ an 8-6 lead over SCGS.

The SCGS defense lost some of its potency in the second quarter. Nanyang Girls’ took advantage to go on a scoring streak and scored three consecutive lay-ups to pull away from SCGS. At the same time, their defense remained tight and SCGS were unable to score on their lay ups and their long range shots.

A Patricia Orenza (SCGS #7) free throw was SCGS’s only point for the second quarter, and Nanyang Girls’ led 16-7 at half-time.

To counter the Nanyang Girls’ defense, SCGS began swinging the ball around to find an open lane to drive in. However, Nanyang Girls’ were able to intercept their passes and score on their fast breaks to widen the lead.

While Nanyang Girls’ were able to prevent SCGS from driving in, they also drew a few fouls to allow SCGS to reduce the deficit. SCGS scored 10 out of their 18 points in this quarter alone from free throws.

At the same time, Nanyang Girls’ found success in their long range shots and they led 35-25 heading into the fourth quarter.

In spite of the huge deficit, the SCGS morale remained high and they continued to find lanes to drive in and score. This was only met with some success as Nanyang Girls’ defense remained potent.

SCGS also tightened their defense to prevent Nanyang Girls’ from driving in. However, Nanyang Girls’ adapted and shot from longer range with some success.

Nanyang Girls’ were able to keep their lead for most of the quarter and they wrapped up the 43-33 win to clinch their title.

NYGH captain, Adeline Wong (#7), said, “We worked very hard for today’s game and we managed to block their 3-pointers which was a killer in our previous game. We really progressed a lot as a team and we have become better as a team.”