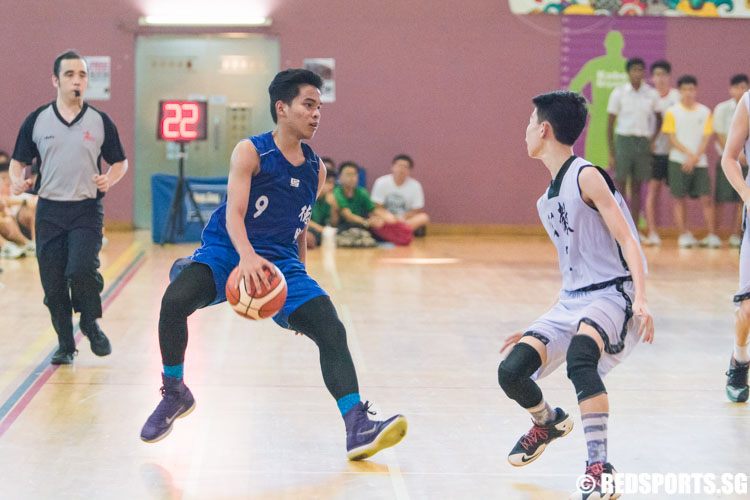 Clementi Sports Hall, Tuesday, April 12, 2016 — The score was close for most of the game, but Dunman Secondary (DMN) eventually beat Catholic High School (CHS) 60-53 to secure a spot in the final of the National B Division Basketball Championship.

The win improves Dunman’s win-loss record in the Nationals to 5-2 while Catholic High drop to 5-2.

Dunman will take on North Vista in the final while Catholic High will play Woodgrove in the 3rd/4th playoffs.

Dunman had previously met Catholic High during the National preliminary rounds and had lost to them by 2 points.

Dunman were able to penetrate Catholic High’s defense and score their lay-ups to establish a commanding 9-0 lead within the first five minutes of the first quarter.

Catholic High made many attempts to drive in but they were all successfully blocked by Dunman. They resorted to making short range attempts which had some success. Dunman led 14-6 at the end of the first quarter.

While Dunman managed to block many of Catholic High’s driving in attempts, they also made a few fouls. As a result, Catholic High were able to reduce the deficit through their free throws. Catholic High also caught more of their defensive rebounds and scored on their fast breaks.

Not to be outdone, Dunman started shooting from the 3-point line to counter Catholic High’s zone defense. This managed to keep them in the lead. However, Catholic High were able to penetrate Dunman’s full court defense and score their lay-ups, reducing the deficit to 19-21.

A 3-pointer plus a lay-up by Travis (CHS #3) gave Catholic High a 26-23 lead over Dunman with little more than a minute left to the second quarter.

In the last 15 seconds, Mohamed Shukri took advantage of an open Catholic High defense to score a lay-up to give Dunman the 28-27 lead at half time.

The third quarter saw both teams bagging their defensive rebounds and attempting fast breaks. Catholic High made a few careless passes which Dunman easily intercepted and converted their lay-ups to build a 36-29 lead over Catholic High.

At the same time, Dunman’s defense became less potent and Catholic High took advantage of open lanes to drive and score. They were able to reduce the deficit to 35-38. A 3-pointer by Kai Xuan (CHS #4) and an under basket by Keith Png (CHS #15) gave Catholic High a 40-38 lead with less than two minutes left to the quarter.

In the last 30 seconds of the third quarter, Catholic High committed a foul on Shukri (DMN #9), giving him two free throws which he converted to tie the game at 40-40 heading into the fourth quarter.

Both teams matched each other point for point in the fourth quarter. However, Dunman tightened up on their defense and managed to prevent many of Catholic High’s attempts to drive in. Their long range shooting also met with success, allowing them to pull away from Catholic High to lead 54-47.

While Catholic High were able to score on their fast breaks, they were unable to overcome the deficit and Dunman wrapped up the 60-53 win.

When asked about the game, Dunman captain, Shukri (#9), said, “We had lost to them before so we are really happy that we managed to beat them today, but I think we can still improve from today. I feel very proud of my team for not putting their head down despite losing a few games in the Nationals. North Vista is a very strong team so we have to play better and be more aggressive.”