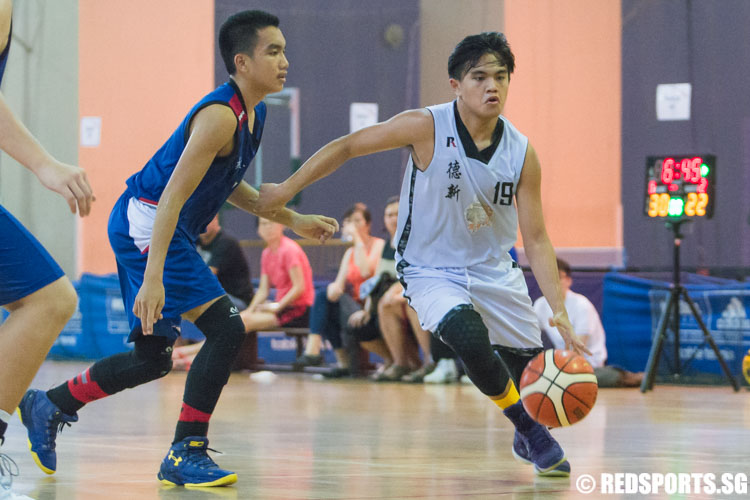 North Vista will go into the final against Dunman Secondary with a perfect 7-0 win-loss record in the National Championship. Woodgrove, who drop to 3-4, will play against Catholic High School in the 3rd/4th playoffs.

Woodgrove played a man-to-man defense but North Vista swung the ball around and drove in constantly to penetrate to extend their lead to 8-0 four minutes into the first quarter.

North Vista played a zone defense to force Woodgrove to shoot from the 3-point line. However, Woodgrove had the advantage of taller players, and they scored their under baskets to reduce the deficit to two points (9-11).

Despite Woodgrove’s height advantage, North Vista was able to catch their defensive rebounds and score on their fast breaks. They also played a full court defense which helped them to intercept Woodgrove passes and score. North Vista led 26-15 at the end of the first quarter.

North Vista continued scoring on their lay-ups and their fast breaks in the second quarter. However, their defense remained porous as Woodgrove scored three consecutive lay-ups to reduce the deficit.

To prevent North Vista from widening their lead, Woodgrove tightened their defense. While they successfully blocked North Vista’s drives in, they also caused a few fouls, allowing, North Vista to extend their lead through free throws.

On the other hand, North Vista successfully switched to shooting from the long range to counter Woodgrove’s tight defense. Woodgrove continued to bag defensive rebounds and score on their fast breaks, but North Vista maintained a 41-31 lead at half-time.

In the third quarter, North Vista tightened on their defense which made it difficult for Woodgrove to score their lay-ups. Hence, Woodgrove resorted to shooting from the long range. While it had some success, they were unable to overcome the deficit.

North Vista continued to bag their defensive rebounds and score on their fast breaks to lead 63-51 heading into the fourth quarter.

The fourth quarter saw North Vista scoring lay-up after lay-up. Their accurate passing and drives into open lanes, coupled with successful short range shots ensured that they remained firmly in the lead for the rest of the quarter.

While Woodgrove were able to score some of their offensive rebounds, North Vista were adept in blocking Woodgrove’s drives in to crush their hopes of overcoming the deficit.

North Vista took home the 80-56 win to remain undefeated from the start of their zonal campaign.

Christian (NV #19) said, “They (Woodgrove) gave us a tough fight. We will play our best in the final. It is good that we are in the final but it is anybody’s game so we just got to work hard.”

Sim Xuan (NV #2) added, “Our game was going well. Our 3-pointers were going in and we started to talk more about our defense and began playing as a team.”