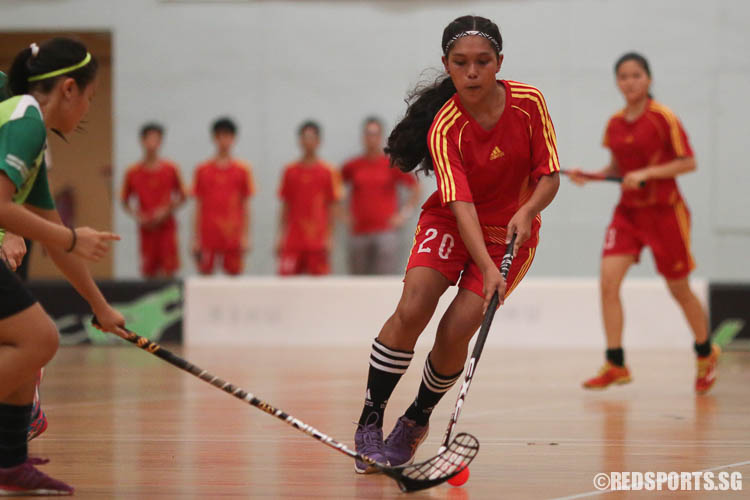 Edelyn Grace Embile (BM #20) steers the ball away from her opponent. She scored a game high of 3 goals in the victory. (Photo 1 © Chua Kai Yun/Red Sports)

Last year, Bukit Merah had finished third in the championship. This year’s title win was Bukit Merah’s fourth in the last five years, and their seventh overall.

Bukit Merah dominated the game from beginning to end, led by Edelyn Grace Embile (BMS #20), who was the top scorer with three goals.

Bukit Merah drew first blood when Berdan Jerylou Concepcion (BMS #21) unleashed a drag shot just inside the D which flew right into the net. Orchid Park then retaliated soon after, with Daphne Tan (OPS #16) hitting a clean shot into the net to make it 1–1. The Orchid Park supporters went wild in celebration.

The tight opening exchanges did not last, however, as Bukit Merah powered up in the last five minutes of the first period to score four consecutive goals, dampening Orchid Park’s morale. The four goals were scored by Nureen Farishah (BMS #11), Edelyn Embile (BMS #20), Berdan Concepcion (BMS #21) and Nurul Syafiqah (BMS #24). This gave Bukit Merah a comfortable lead of 5–1 going into the second period.

In the second period, Bukit Merah continued their scoring streak and bagged two more goals in the first 10 minutes.

Though the game was not in their favour, Orchid Park refused to give up the fight. There were numerous instances whereby the Orchid Park players found themselves right in front of goal, but failed to convert. This was attributed to the impressive saves of Bukit Merah’s goalkeeper, Jessica Chua (BM #16).

Orchid Park then saw a glimmer of hope as Nurul Izzah (OPS #2) scored a goal before the end of the second period to reduce the deficit to five goals (2-7).

During a time-out, there was a heartwarming moment of sportsmanship when Bukit Merah’s goalkeeper, Jessica Chua (BMS #16), was comforting Daphne Tan (OPS #16) as she appeared to be on the verge of breaking down.

It meant that Bukit Merah wrapped up the game with a comfortable 10–3 victory.

On her team’s performance, Jessica Chua (BMS #16) commented, “I feel very proud of the team because everybody gave their best. From a goalkeeper’s perspective, I could see everyone fighting really hard despite many injuries, and that makes me grateful to have a team like this.”

Captain Nureen Farishah (BMS #11) added, “We didn’t start very well but we learned from our mistakes. It was only our first period and we tried to heed our coach’s advice by letting go of all our nerves on court.”

Edelyn Embile (BMS #20) then ended off by exclaiming happily, “Finally it (the championship title) is in our hands again!”