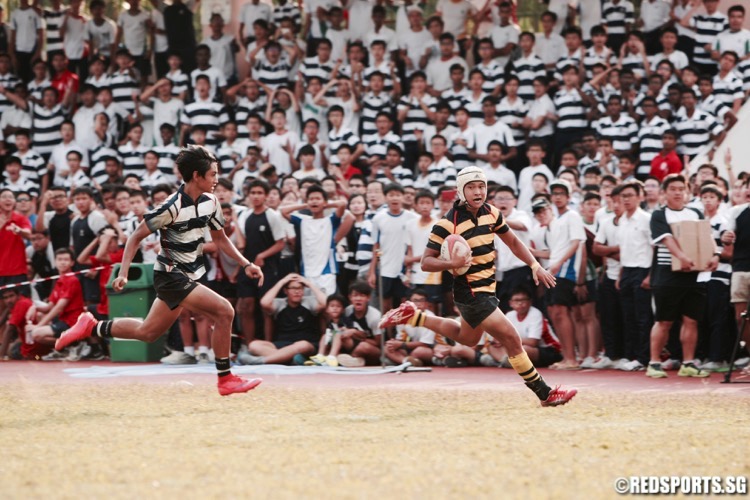 Benjamin Poey of ACS(I) on his way to scoring the sudden death try in front of a packed stand. (Photo 1 © Les Tan/Red Sports)

ACS(I) and St. Andrew’s had met earlier in the preliminary round, with St. Andrew’s dominating the tie 22–0 then. While that scoreline may have indicated a possibly one-sided affair in the final, it was anything but.

In fact, it was ACS(I) who started on the front foot, dominating for most of the first half. Within the first five minutes of the match, ACS(I) went ahead through an unconverted try by hooker Benjamin Lim (#2).

With most of the opening exchanges being played in Saints’ half, it was inevitable that ACS(I) finally earned a penalty in the 14th minute. Unfortunately, ACS(I) scrum-half Matthew Robinson (#9), who had missed the earlier conversion, missed again.

The tide changed again, though, when Mohammad-Mikha Khaleel (ACS(I) #8) managed to grab hold of the ball and break forward, using his massive burly frame to shake off tackles before finally being brought down.

Several tackles later, ACS(I) earned a scrum near the try zone, with Samuel Lee (SAS #1) receiving his marching orders for a dangerous foul. From the scrum, the ball was passed down the line and Matthew Robinson (ACS(I) #9) managed to evade a few tackles before getting stopped inches from the try line.

From the ensuing ruck, flanker Muhammad Nur Solihin (ACS(I) #7) powered himself over the line for ACS(I)’s second try. As Robinson lay flat out on the try-line from taking a big hit, centre Tristan Yeow (ACS(I) #12) took over kicking duties, converting to make it 12–0.

St. Andrew’s were not about to go down without a fight, and they sparked into life in the final 10 minutes of the game. They scored their first try nine minutes from time, with Philip Distor Joseph (SAS #2) touching down via a driving maul on the right side of the field.

In spite of the very tight angle, Saints captain Viviyan Philip (#13) kicked a successful conversion to reduce the deficit to a precarious five points (7–12).

Aware that one more try could seal the game for them, St. Andrew’s continued rallying forward and earned their reward barely four minutes later. After a line-out on the right sideline near the try zone, another driving maul led to Ang Seow Pinn (SAS #26) scoring the try to level the scores at 12–12, sparking boisterous celebrations from the Saints faithful.

With the crowd holding its breath, Viviyan Philip (SAS #13) failed to convert. The 12–12 scoreline remained intact for the last few minutes of the game, and a rare sudden death extra-time loomed.

St. Andrew’s in fact looked the more likely team to secure the win as extra-time began, as they dominated possession, with Timothy Pan (SAS #15) almost breaking through on the right.

Then, in a sudden turnover of possession, Ian Teh (ACS(I) #13) passed the ball way out to Benjamin Poey (ACS(I) #15) on the extreme left wing, and the latter sprinted all the way from his own half to the other end, evading two tackles before diving over the try line.

It was pure euphoria as the whole ACS(I) team rushed forward to embrace their try-scorer, while ACS(I) student supporters thronged the field in joyful celebration.

When asked what went through his mind after his moment of glory, Benjamin Poey exclaimed, “I felt really happy, honestly I did not expect it at all. But we did well collectively as a team, so it’s not all my effort but the whole team’s effort – I don’t take credit for anything. I just feel very happy now that we have ended the B Div season well in my last year playing for ACS.”

Benjamin acknowledged the fear after St. Andrew’s pulled themselves back into the game. He said, “I was a bit afraid for a while after Saints scored. But through the team talk that we had when we huddled up after they scored, I could see the fire in everyone’s eyes – they really wanted to win this really, really badly – and true enough we did it; we gave 100% and thankfully we won in the end.”