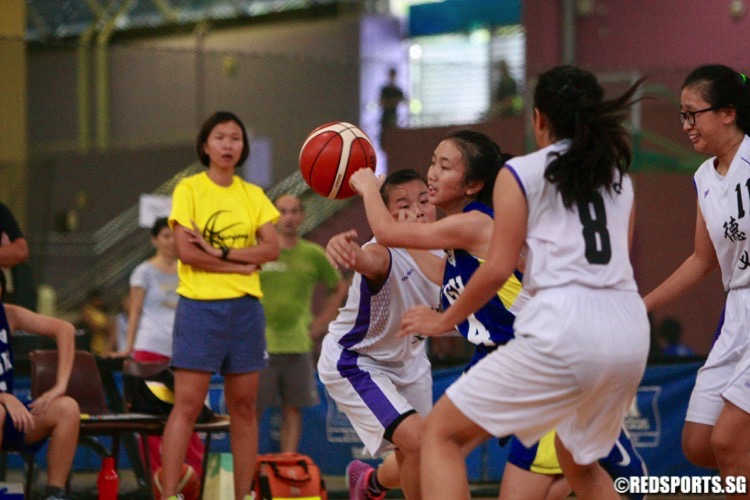 Glades (NYGH #4) scored a game high of 16 points while Teo Shiok Zhen (DYS #10) scored an impressive five 3-pointers to lead her team with 15.

Both teams matched each other point for point at the start. As time went on, Nanyang Girls’ got into the rhythm of the game and tightened their defense to prevent Deyi from scoring their lay-ups.

Nanyang Girls’, whose taller players used their advantage to score and catch defensive rebounds, widened their lead to 15-8.

Deyi switched to a full court defense in an attempt to stop Nanyang Girls’ from widening the lead. They had some success, and they were able to intercept a few passes and score their fast breaks to reduce the deficit to two points (13-15).

Deyi also began to constantly pass the ball around and attempt shots from the 3-point line. This change in tactics gave Shiok Zhen a chance to display her 3-point shooting prowess and give Deyi a 19-15 lead.

Nanyang Girls’ were not shaken by this turn of events and continued driving in and trying to score. Coupled with their success in offensive rebounds and scoring, Nanyang Girls’ took back a lead of 26-19 at halftime.

Deyi switched back to a man-to-man defense in the third quarter to pressure Nanyang Girls’ into making mistakes. While this had success, Nanyang Girls’ were equally adept at intercepting Deyi’s passes, which led to neither team scoring for a while.

Deyi mixed their tactic of 3-point shooting with passing the ball and getting under the basket to shoot. This managed to bag them a few points. However, Nanyang’s defense remained potent as they were able to prevent Deyi from reducing the deficit.

While Deyi’s defense remained tight, they also committed quite a few fouls on Nanyang Girls’ who were able to score from their free throws to widen the lead. Not only that, Nanyang Girls’ were also successful in their short-range scoring attempts which crushed Deyi’s hopes of taking back the lead.

The fourth quarter saw much of the same action but Deyi improved in their offensive rebounds. Despite trailing by a lot, Deyi kept up an aggressive defense.

However, Nanyang Girls’ offense proved too swift for Deyi as they scored lay-up after lay-up. Furthermore, they were also able to bag their defensive rebounds and convert them into points to take home the 59-40 win.

Nanyang will play against Singapore Chinese Girls’ School on Thursday, April 7, to contend for top place in their group while Deyi will meet North Vista Secondary on the same day.