National B Div Floorball: Victoria School explode for 5 goals in 3rd period to beat Coral and qualify for final 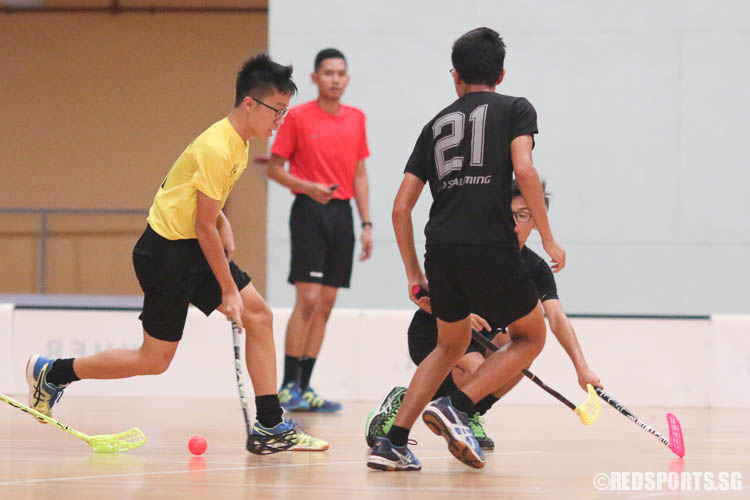 Joel Sim (VS #71) dribbles the ball under pressure from Coral players. He bagged a game high of 3 goals in the victory. (Photo 1 © Chua Kai Yun/Red Sports)

Yishun Sports Hall, 1st April 2016, Friday — The teams exchanged leads throughout the game, but Victoria School (VS) eventually made a comeback in the third period to beat Coral Secondary School (CSS) 8-5 in the semi-finals of the National B Division Floorball Championship.

Both teams were evenly matched, but VS had the edge with a swifter offense to lead 2-1 at the end of the first period through goals by Muhd Irfan (VS #64) and Joel Sim (VS #71), with Lai Jia Jie (#CSS #71) notching one for Coral.

A half-court goal scored by Wang Zhi Xian (CSS #7) 10 seconds into the second period tied the score at 2-2. Coral’s offense became swifter but VS intercepted many of Coral’s scoring attempts.

When VS got the ball over to the attacking half, Coral players were quick to pressure VS into a few mistakes and made scoring difficult.

Despite that, VS managed to find a loophole in Coral’s defense and scored another goal through Ryan Tham (VS #72) to take back the lead at 3-2.

Coral switched tactics to counter the VS defense, running into space and finding each other with long passes. This tactic saw Muhammad Khalis Hidayatullah Bin Zulkifli (CSS #23) score an equalising goal to end the second period at 3-3.

Zhi Xian (CSS #7) scored yet another goal 30 seconds into the third period to wrest back the lead from VS. Encouraged by this, Coral’s defense became tighter and they were able to intercept quite a few VS passes.

VS remained calm in the face of Coral’s aggression and Joel Sim (VS #71) scored a goal to even out the score at 4-4 with nine minutes left to the end of the game.

The VS offense however proved too swift for Coral as they went on to score four consecutive goals through Tan Ding Feng (VS #78), Darius Phua (VS #67), Joel Sim (VS #71), and Muhammad Ihsan (VS #63) to establish a commanding 8-4 lead.

Coral did not lose heart but could not score until Gwee Yuan Sheng (CSS #77) managed a consolation goal 30 seconds before the final whistle.

Victoria School captain, Ryan Tham (#72), commented, “I think both teams played really well as the score was really close for most of the game. I would like to thank the VS supporters for cheering us on until the end. We had some flaws but I believe we can work on it and become stronger for the next game.”