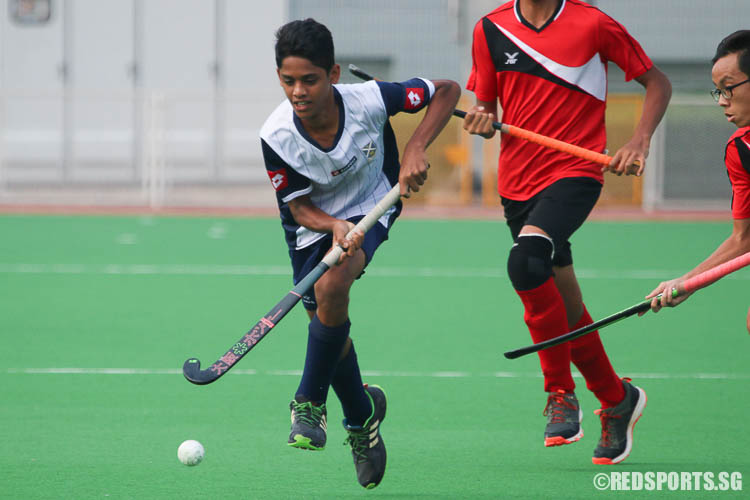 This was St. Andrew’s first B Division title win since 2008. In last year’s championship, they had finished as runners-up to Raffles Institution (RI).

This time round, St. Andrew’s had edged out RI 1–0 in the semi-finals, via a golden goal in extra time. In the other semi-final, Seng Kang defeated St. Joseph’s Institution 4–1 on penalties after the match had ended 1–1.

St. Andrew’s managed to stay unbeaten en route to clinching the title, finishing with an impressive 7–1–0 win-draw-loss record. The only game they did not win was a 2–2 draw with Seng Kang when the two sides met earlier in Round 2.

St. Andrew’s always looked like the more threatening side in the final, being relentless in attack from the first whistle. 10 minutes into the game, a flurry of attempts at goal from a St. Andrew’s penalty corner forced a brilliant double save from the Seng Kang goalkeeper.

This time, though, St. Andrew’s finally opened the scoring. Sean Au (SAS #8) pushed the ball towards Hariraj Naidu (SAS #7), who diverted it for Daryl Tan (SAS #2) to sweep it into the bottom right corner of the goal. St. Andrew’s managed to protect their slender lead for the rest of the first half.

In the second half, St. Andrew’s continued launching attack after attack to extend their lead, but were ultimately prevented by some dogged defending from Seng Kang. On the other hand, Seng Kang looked to get the equaliser from counter attack situations, but missed opportunities were aplenty.

Eventually, St. Andrew’s managed to seize control of the game in the closing stages, getting penalty corners one after another before putting the nail in the coffin with the last play of the game.

From a well-worked penalty corner, goalscorer Daryl Tan (SAS #2) turned provider as he swept the ball across the D for Naveen Kumar (SAS #5) to deflect it into goal.

The final whistle was blown shortly after to cue boisterous cheers from the St. Andrew’s supporters in the stands.

On the victory, goalscorer and assist-provider Daryl Tan remarked, “I think today we went all out; both teams played well and put up a tough fight but I think overall we dominated the game. I definitely feel happy for my own performance, but overall it was all for the team and all for the win.”