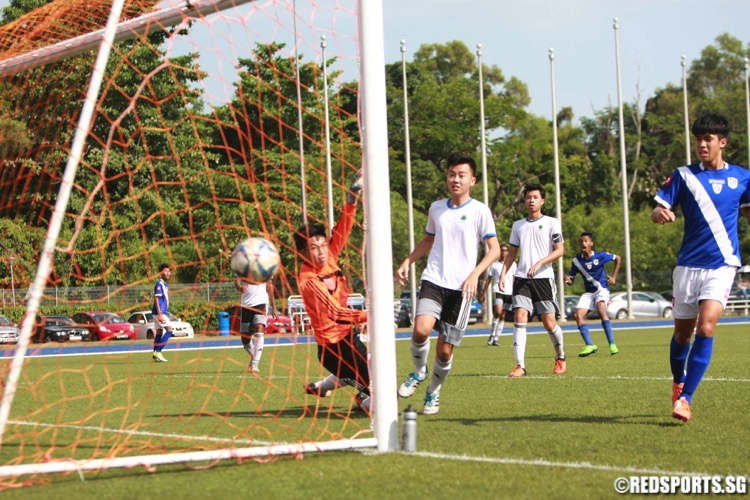 The winning strike from outside the box by Haiqal (#17) finds its way into the St Patrick’s goal despite the efforts of Lionel Tiong (SPS #1) in goal. (Photo 1 © Les Tan/Red Sports)

Tanjong Katong struck the woodwork twice within 7 minutes of the start when two venomous shots from Muhammad Haiqal (#17) and Sean Gerard (#16) hit the posts.

St. Patrick’s took the lead at the half-hour mark when a free-kick delivered from left-back Curtis Tan (#7) found an unmarked Keshav Kumar (#3) in the penalty box, and he angled a glancing header into the bottom corner of the net.

St. Patrick’s kept their 1-0 lead at half time but Tanjong Katong soon tied it up 7 minutes after the break.

Lucas Ng (TK #21) jinked past the St. Patrick’s defence on the left wing and delivered a fizzing cross across the goalmouth before right-winger Muhammad Haikel (#11) ghosted into the box, unmarked, and stabbed the ball into the net.

Tanjong Katong added a second when a stunning strike from Muhammad Haiqal (#17) outside the penalty box found the back of the net, beating both the defenders and goalkeeper Lionel Tiong (#1).

Tanjong Katong have now won seven of their last nine games in the zone and will be looking forward to extend their run of form in the National Championship.

Despite the loss, St. Patrick’s will also qualify for the National Championship along with Tanjong Katong, Siglap Secondary and Coral Secondary as part of the top four.