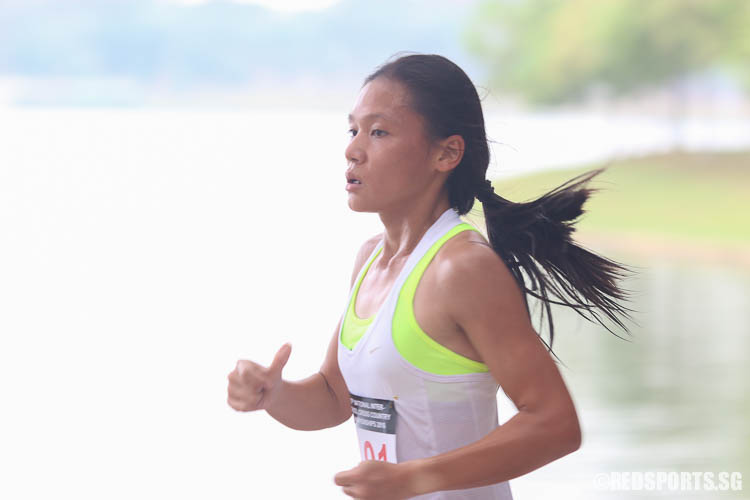 Bedok Reservoir Park, Wednesday, March 23, 2016 — Nicole Low of Victoria Junior College (VJC) covered the 3.6km route in a time of 13 minutes and 46 seconds to clinch the A Division girls title for the second year running at the National Schools Cross Country Championships.

Winning back to back individual A Division titles is a rare feat. Only seven female A Division runners have achieved this feat since 1971. The last A Division female runner to do so before Nicole Low was Loh Yanni, then of Raffles Junior College, in 2005 and 2006. Before Loh, it was Pamela Chia Xian Qing, then of Hwa Chong Junior College, who did the double in 2002 and 2003.

Nicole’s teammate, Vanessa Lee, clinched the silver medal in a time of 14:09.90 while Natalie Soh of Raffles Institution (RI) came in third with a time of 14:51.11, repeating their finishing positions from the previous year.

The front pack split quickly pulled to the front almost immediately after flag-off. Vanessa led the pack from the beginning of the race to the 400m mark, where Nicole caught up with her following a slower start. Natalie followed at a distance while maintaining a constant rhythm.

However, Nicole and Vanessa picked up the pace at the turnaround point, leaving Natalie trailing behind. Nicole eventually managed to outsprint her teammate towards the end to secure her national title.

This was the first time VJC defended their girls’ title since 1996, when they won their second of three consecutive titles.

The runners will now turn their attention to the National Inter-School Track and Field Championships, which begins on April 13.