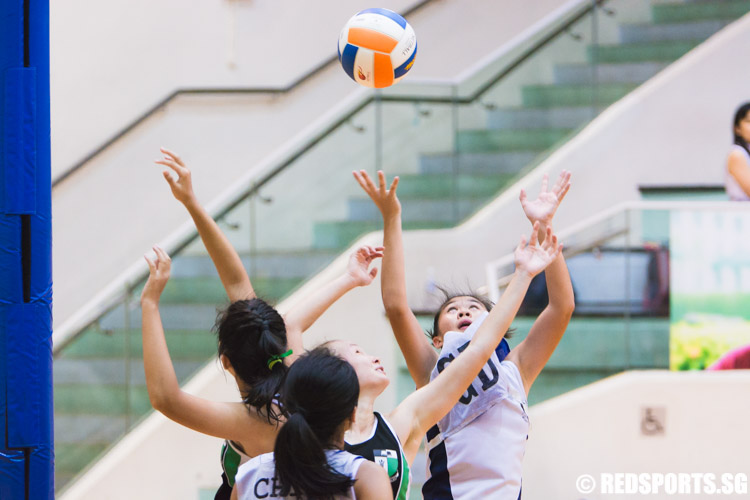 CHIJ(TP) will proceed into the National Championship with a perfect 8-0 win-loss record while this is RGS’ first loss of the season.

CHIJ(TP) had breezed through the first and second rounds but they finally met their match as RGS matched them point for point in the first quarter.

Though RGS’ offense was swift, CHIJ(TP)’s defense was aggressive in intercepting. Coupled with a strong offense, CHIJ(TP) were able to pull away from RGS to end the first quarter leading 9-5.

The second quarter saw an improvement in RGS’ offense. RGS players constantly ran to find space which enabled them to make clear passes at each other. This made it difficult for CHIJ(TP) to defend and RGS were able to score.

However, CHIJ(TP)’s tactic of making long passes to each other also caused problems for RGS’ defense. Goal Shooter (GS), Priscilla Wong, having an impressive 100% shooting percentage, CHIJ(TP) held the lead in the second quarter. Priscilla would go on to score 26 out of her 30 attempts.

Though Priscilla (CHIJ(TP) GS) had the height advantage, RGS Goal Keeper (GK), Miki Ng, managed to intercept quite a few passes. RGS were also calm in the face of CHIJ(TP)’s aggressive defense and did not make any careless passes.

Thus, RGS were able to reduce the deficit to just one (14-15) heading into the 3rd quarter.

The third quarter saw both teams committing careless mistakes which each took advantage of. CHIJ(TP)’s offense was less potent but their swift passing ensured that RGS found difficulty in defending them. Hence, CHIJ(TP) were still able to keep their lead.

RGS adapted to CHIJ(TP)’s tight defense by making long overhead passes. Strong teamwork between RGS Goal Attack (GA), Alexandra Mel Tan, and Goal Shooter (GS), Natalia Maluquer, ensured that CHIJ(TP) did not get a chance to widen the point gap. Natalia (RGS GS) scored four out five attempts in the third quarter. She went on to score a total of 16 out of her 20 attempts.

However, in the last 3 minutes of the quarter, RGS’ made careless passes which CHIJ(TP) capitalized on to take a 22-19 lead at the end of the third quarter.

The fourth quarter saw RGS become more aggressive in a bid to reduce the 3-point deficit. CHIJ(TP) also turned up a notch in their defense as they fought to keep their lead.

This led to Natalia (RGS GS) missing two shots which ultimately proved crucial as RGS were unable to find their way back thereafter. RGS also made many careless passes which were easily intercepted and converted into shots by CHIJ(TP).

Despite Miki (RGS GK) blocking quite a few passes to Priscilla (CHIJ(TP) GS), the CHIJ(TP) offense proved too fast. They were able to to score consecutive baskets to widen the lead to eight points with three minutes left.

There was no coming back for RGS as CHIJ(TP) bagged their second consecutive title with a 32-24 win.

CHIJ(TP) captain, Alëna Rae Ong, said, “The game was very exhilarating and nerve-wracking in the start. The game got more relaxed but the pressure was still there. My team has worked hard; we have overcome many obstacles and have definitely improved a lot. It is clear that we can still progress further and we have the will to go further.”

RGS captain, Chloe Lee commented, “Both teams fought really hard and CHIJ deserved the win. We also worked really hard and put in our best effort. Many of us got injured halfway through the season and I liked how they still wanted to be put down to play. I think we definitely improved in the accuracy of our passes and also in working as a team.”