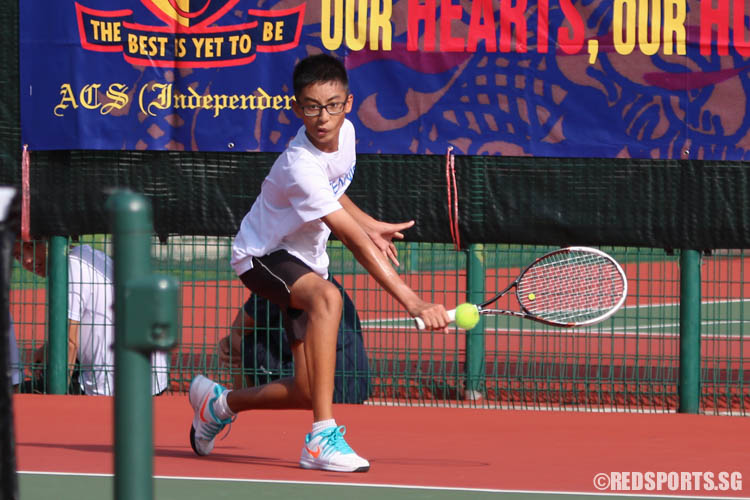 In 2015, they defeated Raffles Institution 4-1 in the finals.

The third singles saw some drama when Tiah Jeng Ern of ACS(I) went down with a serious cramp against Chew Han Qing of ACS(BR). Despite losing the second set, he persevered on and beat Han Qing 7-5 in the last set to clinch his win.

Jeng Ern said, “My friends, teammates and the coaches cheering me on gave me the motivation to continue playing and finish the set.”

ACS(I) captain, Justin Thaddeus Oeni, commented, “It was a hard-earned victory from my team because we have been playing really well and we trained really hard for the finals.

“We were a bit nervous here and there but I think we really played our best. Comparing us from the beginning, I think my team not only grew as a team but also as people. Through teamwork we have grown closer to each other and have bonded really well together.”

When asked about the games, ACS(BR) captain, Harun Hamzah, said, “I felt really disappointed because we lost 5-0. During the preliminary rounds we put up a good fight and we may have become a little overconfident in our performance. I felt that my game was nerve-wracking because Shawn Ng is a very good player and he proved that he is better.”

He also added, “I think we did better than in the past two years. We had a strong team but we lacked discipline. This year, our team may have not been so strong but we have a very strong faith and will in us. Our discipline also helped us to get where we are now.”