South Zone B Div Bball: Holy Innocents’ roll over Raffles to set up showdown with Guangyang for semis berth 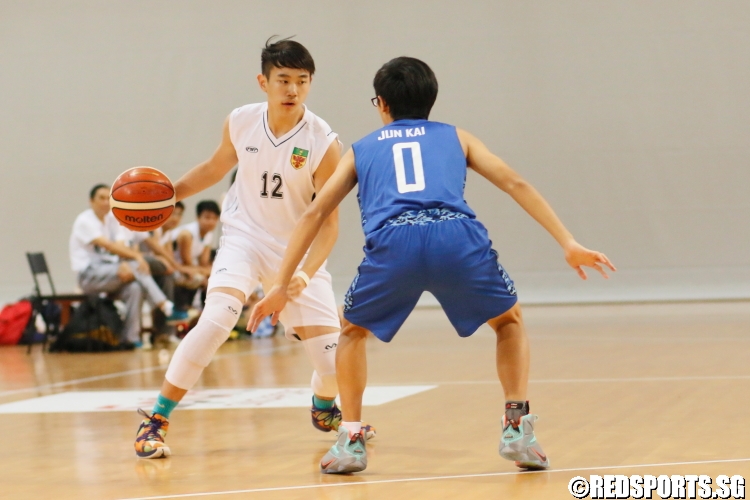 OCBC Arena, Friday, February 19, 2016 — Holy Innocents’ High (HIH) rolled over Raffles Institution (RI) 51-20 to set themselves up for a showdown with Guangyang Secondary for a semi-final berth in the second round of the South Zone B Division Basketball Championship.

With this win, Holy Innocents’ improved to 3-1 in the second round. Raffles, who were already out of contention for a semi-final berth, saw their record fall to 1-3.

Both teams started the game trading baskets, keeping the score tight as the quarter ended with Holy Innocents’ leading 10-7.

In the second period, Holy Innocents’ locked up on the defensive end, forcing Raffles into turnovers which led to easy fast break points. Despite their struggles offensively, Raffles’ defense helped keep them just 10 points behind Holy Innocents’ at the half.

After the break, Raffles struggled to find their rhythm on offense as they committed many turnovers and had trouble finding open looks at the basket. This resulted in a poor offensive performance in the second half as they only managed two and eight points in the third and fourth quarter respectively.

On the other hand, the floodgates opened for Holy Innocents’ on the offensive end as they dropped 16 and 15 points on Raffles in the third and fourth quarter respectively to walk away with a 51-20 victory.

Holy Innocents’ will have to manage at least a four-point win in their crucial match against Guangyang to secure a semi-final berth. Otherwise, they will crash out based on point difference in a three-way tie, assuming that National Junior College, Guangyang and Holy Innocents’ all hold a 4-1 record in Group Q at the end of the second round.

Raffles next play Kuo Chuan Presbyterian, who are also out of the running for a semi-final berth.

Both matches will be held at the OCBC Arena on February 22.