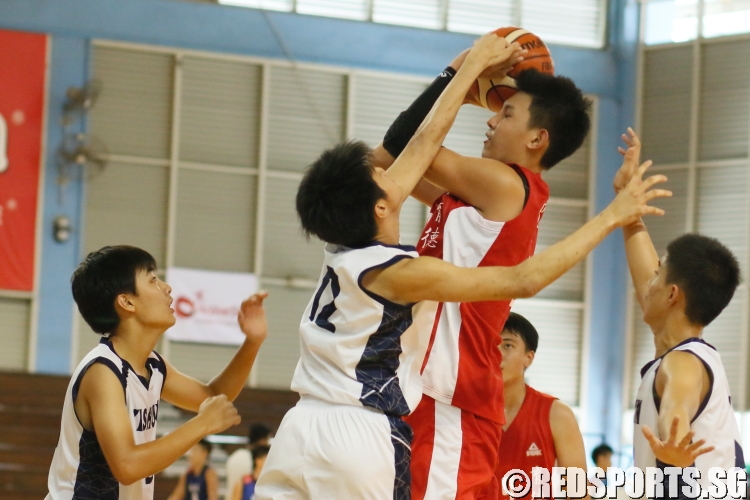 Shi Yu (Edgefield #12) finds himself triple-teamed by the Yishun defense. He had a game-high 20 points in the game. (Photo 1 © REDintern Chan Hua Zheng)

Singapore Basketball Centre, Wednesday, January 27, 2016 – Yishun Secondary defeated Edgefield Secondary 48-45 to bring them one step closer to round 2 of the North Zone B Division Basketball Championship.

Yishun had to win by more than 16 points to qualify for round 2 but were not able to. They now depend on Edgefield’s next match against Sengkang Secondary to see if they can get through to round 2.

It was a close start between Yishun and Edgefield as both teams traded shots. Yishun then pulled away with a 3-pointer by Bryan (#10) to lead 5-2. Both teams were neck and neck and were tied 11-11 as the Edgefield coach called for a timeout. Edgefield’s Shi Yu (#12) scored two more points from free throws in the remaining minutes to end the first quarter leading 13-11.

Edgefield continued to keep their lead by driving in to score. Bryan (#14) and Shi Yu (#12) from Edgefield in particular, dominated the paint by catching most of the rebounds and prevented Yishun from scoring. Yishun made many shot attempts from outside the 3-point line but only one shot by Benedict (#8) made it in. The second quarter ended with Edgefield just ahead at 25-22.

Despite being on the losing end, Yishun picked up in the third quarter, making their shots and capitalising on fast breaks to gain the lead. Edgefield only managed five points during that quarter due to Yishun’s aggressive defence. They were outscored 16-5 as Yishun took a 38-30 lead into the final quarter.

Edgefield quickly caught up in the last quarter with a good defence and tied it up at 41-41 with only two minutes left on the clock. Both teams went back and forth but were not able to score until a foul from Edgefield gave Yishun the chance to take the lead. HS (#6) scored both of the free throws, followed by RX (#4) to help Yishun secure a 48-45 win.

Zheng Long (#5), captain of Yishun, said, “Today was not so bad. I think we played better than previous games but it can still be better.”