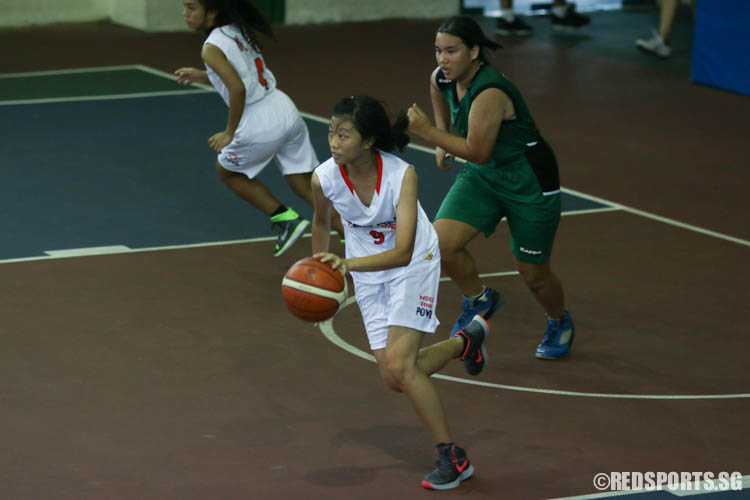 Kho Kai Ting (NA #9) drives up the court after a rebound. She scored a game-high 10 points to lead her team to victory. (Photo 1 © REDintern Chua Kai Yun)

Ngee Ann started the first quarter well to give themselves a good headstart. They led 8-2 after the first 10 minutes.

The game sped up and became more intense in the second quarter, as TJC hit back fiercely. A 3-point basket by Whitney Goh (TJC #10) sent her teammates on the benches into a loud frenzy and the Ngee Ann bench were screaming ‘Defense, defense!’ in an attempt to cheer on their fellow teammates. Ngee Ann were outscored 7-4 in the second quarter but still led by three points (12-9) at half time.

The third quarter was a low-scoring affair, with the two teams restricted to two points each and Ngee Ann took a 14-11 lead into the final quarter.

With one minute to go in the final quarter, TJC managed to reduce the deficit to just one point at 12-13. However, it proved to be insufficient as Ngee Ann replied with a number of good shots to triumph 26-15.