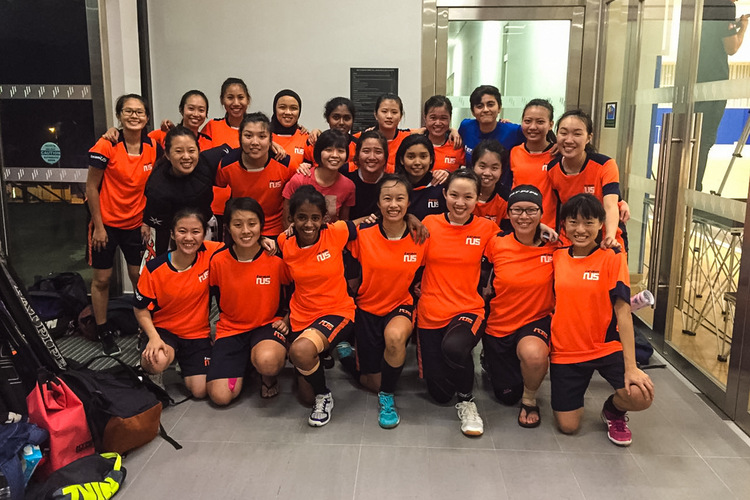 The NUS women’s floorball team defeated SIM 7-5 in the final to retain their title.

“I’m super proud of them, because it is not easy to come back from a loss,” said NUS captain Shannon Yeo (#26).

“Today, everyone came in prepared, and from the first whistle to the final whistle, I can see that everyone played their guts out.

“I’m very proud that everyone managed to play to the best of their abilities and I’m very glad that we can retain the championship title.”

SIM had previously defeated NUS 2-1 in the round robin stage to top the table, and came in as the underdogs.

Both teams went back-and-forth against each other until NUS broke the deadlock in the second period, holding SIM to nil to take a 5-3 lead.

An undaunted SIM bit back in the third period through Felicia Lim (#15) and Goh Woan Lin (#23), who helped SIM reduce the deficit to just a single point.

However, just as things were looking rosy for them, NUS responded each time, to keep themselves safely ahead.

Despite the loss, SIM had no reason to be disappointed with the injection of new players such as Mindy Lim (#6).

“The addition of new players has been a big factor that helped put us through to the final and I’m really glad that they joined us,” said SIM captain Yang Hui Xuan (#22).

“I’m confident and really really sure that these players, including the core players will play well in the upcoming IVP.

“Even though it was a loss, I think the team fought really hard and I’m happy that we’ve come where we are right now.”