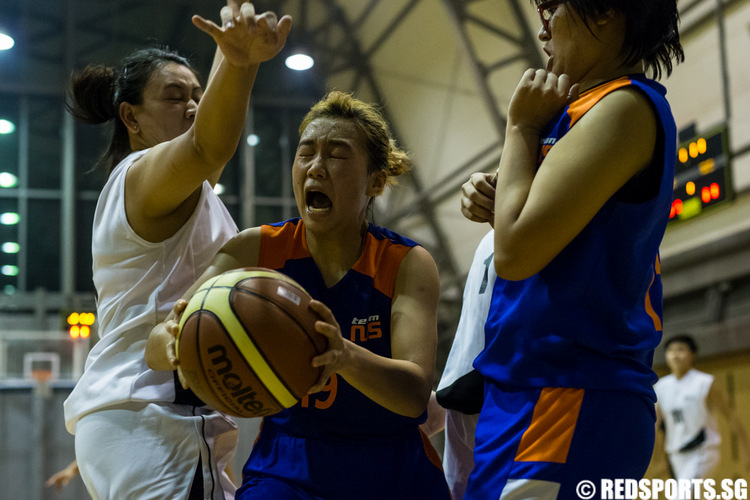 Four of the best frontcourt players in the championship went head to head, and based on individual numbers, SIM had the upper hand, if one considers contributions to the scoreboard.

But the NUS frontcourt duo had a more pivotal impact at the boards, finishing with 12 and 19 rebounds respectively. Of Lim’s (#9) 12 boards, seven were offensive.

The pair’s dominance on the boards, along with Charlene Sia’s (#8) hot shooting form, proved to be the game changer, and overshadowed their SIM counterparts, Eng (#18) and Han (#13), who had 14 and 10 boards.

“Both teams played really well, but I think we really wanted it more and I suppose we had better mental preparation,” said Lim (#19), who also recorded five steals and four blocks.

“Charlene’s three-pointers gave us a morale booster and our confidence went sky-high, and in turn, I think it made SIM a little dejected. But we did have a shaky start and maybe we were nervous.

“But we slowly got back into the game and we had the lead, so we could slowly swing the ball and drag the time.”

Both teams went back-and-forth against each other throughout the game, with NUS building a 10-point lead at the half, to SIM holding them to a 2-12 scoreline in the third quarter.

However, an increasingly rushed offence was the bane for SIM, causing several defensive errors and turnovers, which ultimately led to their downfall in the closing quarter.

“We allowed them to capitalize on the loopholes of our defence and shoot easy jumpers to establish an easy lead over us.

“They were also able to execute their plays at ease which resulted in a more consistent performance.”

Despite the loss, the SIM captain was praises for the NUS team.

“Both teams put up a good fight, but kudos to team NUS for the well-rounded efforts!”

With the win, NUS have secured a berth in the final, which will be played at 7 p.m. on Thursday, September 17. They will go up against defending champions and powerhouses Nanyang Technological University (NTU), who had earlier beaten them 71-35.

“I think that we’re the underdogs and now that we’ve made it into the final, there is no burden or anything,” said Lim (#19).

“I think we might actually put up a good fight against them, because we did come close to them in the first quarter, and nothing is impossible.”