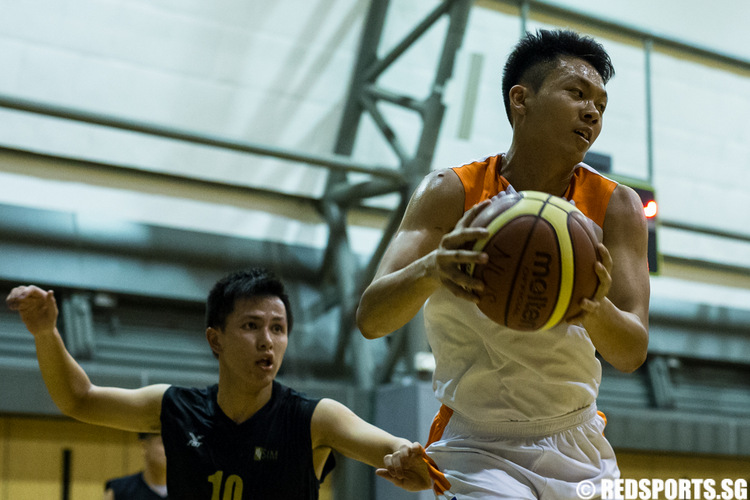 Lim Shengyu (#12) of NUS grabs a rebound against Jason Siow (#10) of SIM. The forward finished with a triple-double of 13 points, 13 rebounds and 12 assists, including four blocks. (Photo 1 © Lim Yong Teck/Red Sports)

“Our players have been very dedicated and they have been very focused on performing their responsibilities, so hopefully, our season will end on a good note,” said NUS captain Ng Hui Wen, who is nursing a right arm injury.

“We treat every game as equal and maintain our humility, and we’ll fight it out on court in every game until we fully retain our title.”

Jeremy Lee’s (#11) hot shooting helped NUS torch SIM for 33 points, but it was national cager Lim Shengyu (#12) who stood out from the pack with a triple-double of 13 points, 13 rebounds and 12 assists, including four blocks.

Richard Neo (#7) was the only one who kept SIM going on offence, and finished as the only player in double-digit scoring.

While Neo (#7) and Jason Siow (#10) helped SIM bite back to keep the game within reach, the NUS starting unit continued their dominance over their counterparts and gradually extended the lead.

For SIM, turnovers were just half of their troubles. The presence of Lim (#12) and Thomas Chua (#21) in the paint turned away several of their attempts, adding to their shooting woes.

Unlike NUS, whose second unit was equally competent, SIM, who were missing the presence of floor general Zhou Zhen Jie (#3), were heavily dependent on Neo (#7), which ultimately led to their downfall.

“We have to be prepared for a tougher game next Thursday, as they are missing a few of their key players,” added NUS captain Ng.

“Both teams will definitely go all out in the final, so we will continue to work as hard and make sure our efforts in the past six months pay off.”

Both teams will meet again in the final, which will be played on Thursday, September 17, at 8.30 p.m.