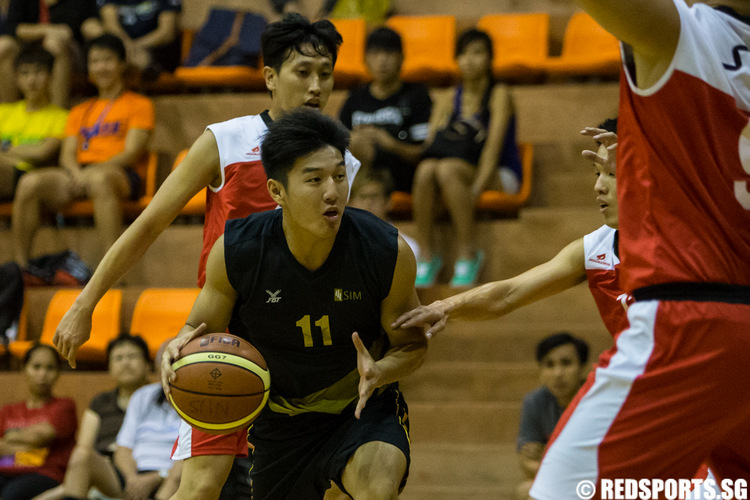 SIM, who finished second runners-up in last year’s edition, were sloppy on both ends, allowing SIT to start the game with a 6-0 run.

With Gan Eng Seng School and Ngee Ann Polytechnic alumnus Pang Chongjing (#24) and Malaysian Loo Choon Phei (#11) joining the fray, the upgraded SIT squad gave the defending Institute-Varsity-Polytechnic (IVP) Games champions a run for their money, keeping the game close to trail only by two points at the half.

Clarence Leong (#9) provided an unexpected spark off the bench in the third quarter, contributing six of his 10 points in just three minutes of play. The centre helped SIT achieve their first lead of the game at 28-24. That, however, was short-lived.

Led by Richard Neo (#7) and Bryan Kor (#11), SIM stormed back with a defensive press to wear SIT’s starters out, forcing turnovers which they easily converted. The pair finished with 12 and 18 points respectively.

Pang (#24) and Khng En Ning (#26) helped SIT bite back with their experience, but despite their efforts, they could not contain the resurgent SIM offence, and eventually conceded the game by a 26-point margin.

SIM will next face defending champions National University of Singapore in their next game, while SIT will play Nanyang Technological University. Both games will be played on Friday, September 11, at 7 p.m. and 8.30 p.m. respectively.