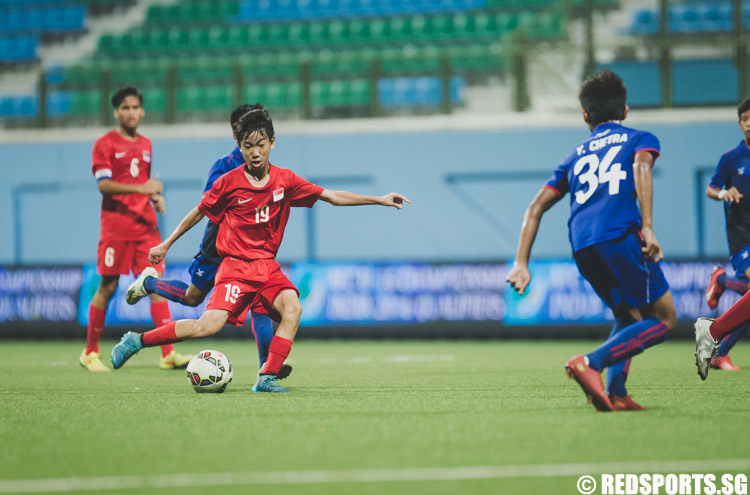 “We gave away an easy goal in the second half, but that goal pushed them mentally and we regrouped after that, and finally, we got a goal and the killer instinct came,” said Singapore coach Selvaraj Vengadasalam.

“We were creating chances and keeping it tight in the first half, but the killer instinct was missing, and the boys were losing concentration as well. Coupled with their technical abilities to play under pressure, these are the two things we need to improve on.”

Speaking against criticisms that the boys lacked physical fitness, coach Selvaraj added, “The boys were very determined in the second half and they really wanted to win. That strong mentality pushed their body to run, and made them forget about their fatigue.

“The boys are improving game by game, especially in the area of goal scoring, desire to work and winning mentality.”

The final tournament of the biennial championship will be held in India, where the top 16 teams in the region will compete. Group winners will qualify for the tournament, alongside hosts India and four or five of the best second-placed teams.

In the earlier game, defending champions North Korean topped the group with a 2-0 win over the Thais and have safely advanced to the next round of their title defence.

Defensively, the hosts contained the visitors well in the first half, giving custodian Kevin Wong (#1) an easy time at the rear.

However, with the exception of Joel Chew (#19), the forward pack appeared hesitant on offence, squandering several prime scoring chances.

After the break, off a brilliant long cross from Ath Ontoch (#12), Cambodia drew first blood with the opener by Sieng Chanthea (#9).

Fortunately, the hosts responded with a goal of their own in the 68th minute.

After drawing the attention of Cambodian keeper Kong Raphath (#1) on the left flank, Khairul Hairie (#21) crossed over to Glenn Kweh (#9) to slot the ball in for the equalizer and the Republic’s first goal of the tournament.

The goal opened the floodgates as Kweh (#9) later returned the favour to facilitate Hairie (#21) for Singapore’s second goal to give them the lead.

Irfan Jeferee (#12) sealed the victory with the third goal, helping Singapore finish the tournament on a high.

“We needed a bit of luck from their goalkeeper, who is their best player. His mistakes helped us get our goals and of course, credits to my players as they did not give up after Cambodia’s first goal,” said coach Selvaraj.

All praises for his charges, he added, “It is not easy coming back after two losses, and usually young boys will cry after that.

“Mentally, they were strong and I really thank the people around who came down to support their games. That pushed the boys and gave them a lot of confidence.”

“We had three big mistakes, but my players tried their best and this is a good experience for them to grow for future,” said Cambodian coach Iki Yusuke, who credited the hosts for their “good technique and tactics”.

“The boys don’t have enough experience in international games and lack good decisions and I take full responsibility for the result in this tournament.”