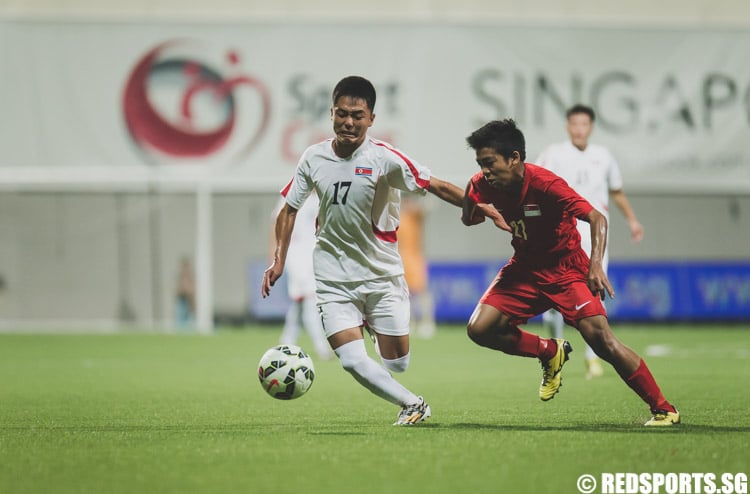 Yun Min (DPRK #17) in action during the 2016 Asian Football Confederation (AFC) U-16 Championship Qualifiers. He converted a free kick in the first half to secure a 1-0 lead for DPRK heading into half-time. (Photo 1 © Soh Jun Wei/Red Sports)

Jalan Besar Sports Centre, Friday, September 4, 2015 — Having suffered a disappointing defeat to Thailand in their opening game, Singapore needed a victory against the Democratic People’s Republic of Korea to increase their hopes of qualifying for the 2016 Asian Football Confederation (AFC) U-16 Championship.

However, despite a laudable effort, their hopes were dashed as they went down 0-3 to the defending champions.

“We played a better team who are physically and technically stronger,” said Selvaraj Vengadasalam.

Despite the loss, the Singapore coach was pleased with the team’s improved performance on the pitch.

“This is the best they have given – in terms of their psychological state, work attitude, spirit, and togetherness. The boys showed a lot of courage, and we defended and fought harder to collect a lot of loose balls.

“They played to instruction, showed out harder, but of course, there are definitely areas for improvement. Playing against bigger teams like North Korea is not just about defence. It’s about what we do when we win the ball, and I think we did quite alright. The boys were composed, but we just could not pull it off.”

The final tournament of the biennial championship will be held in India, where the top 16 teams in the region will compete. Group winners will qualify for the tournament, alongside hosts India and four or five of the best second-placed teams.

Having trounced Cambodia 7-0 in their opening game on Wednesday, the North Koreans are no stranger to the intensity of the tournament, having won the title twice, including one in 2010.

Anchored by midfielder Kung Jin Song (#5), the visitors forced Singapore to go on the defensive right from kick-off, but custodian Kevin Wong (#1) made five point blank saves to boost the hosts’ morale.

In the 11th minute, the Republic had a good chance to bring home their first goal but Afiq Ehwan (#23) botched a point blank header off a beautiful cross by Matin Mohamad (#13).

However, on the ensuing possession, Kye Tam (#7) was taken out and it was ruled just outside the box, which was a close call for the hosts. However, Lady Luck was not on their side as Yun Min (#17) duly converted the free kick to give the visitors a 1-0 lead.

Unlike their lacklustre performance against the Thais, Singapore executed a better offensive game and had several opportunities for an equalizer in the half, but simply could not connect.

In the second half, the defending champions added two more goals by Kye (#7) and Ri Song Jin (#11) to seal their victory.

“I appreciate the individual tactics and teamwork of Singapore,” said North Korea’s coach Kim Yong Hun, who gave credit to the hosts for their performance against his charges.

Lamenting that he was only “a little bit satisfied” with his team’s performance, he added, “We learnt a lot from the Singaporeans and at certain points, we could not press when we were attacking.

“Physically, the players were not well prepared and we have to place more emphasis on our attack and teamwork.”

Singapore will play their final game against Cambodia on Sunday, September 6. The game will kick-off at 8 p.m. at Jalan Besar Stadium. Cambodia lost 0-1 to the Thais in an earlier game.