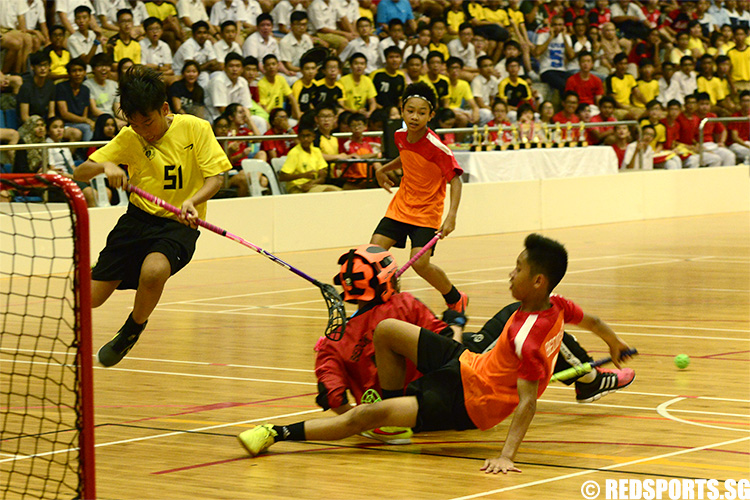 “It feels great and we have never felt better,” said Ihsan Isham (#63).

Victoria had previously lost 4–9 to Springfield in the second round and the Victoria captain credited the victory to the experience.

“The team’s performance was consistent throughout the entire tournament and I think we had a wake-up call when we went down to Springfield.

“We all needed that wake-up call to make us play better and I think it worked for us.”

Victoria proved themselves a class above their opponents and dominated from the start, blitzing to a 5–0 lead at the end of the second period.

Despite the deficit, first-time finalists Bedok South put up a laudable performance, with the quartet of Amos Pang (#7), Bryan Chua (#9), Justin Downing (#73) and Lee Shi Feng (#77) leading the way on offence.

Their efforts finally paid off three minutes into the third period, when Pang (#7) scored to give Bedok South their first goal of the game. By then, however, Victoria had already established an insurmountable lead to easily bring home a much deserved victory.

Despite the loss, Bedok South teacher-in-charge Yosef Effendy was pleased with his charges’ performance.

“My boys really trained very hard and put their all in the afternoons to train for this, and I’m really really proud that they made it to the final, because last year, we did not even make it to the second round,” he said.

“The very first time I took over as teacher-in-charge, I brought them all together as one Bedok South floorball family. So when you see everyone putting so much effort into the game, it is actually heart-wrenching to see them lose in the final.

“While it is painful for me, I’m sure these boys will train harder and come back stronger next season and achieve something bigger.”