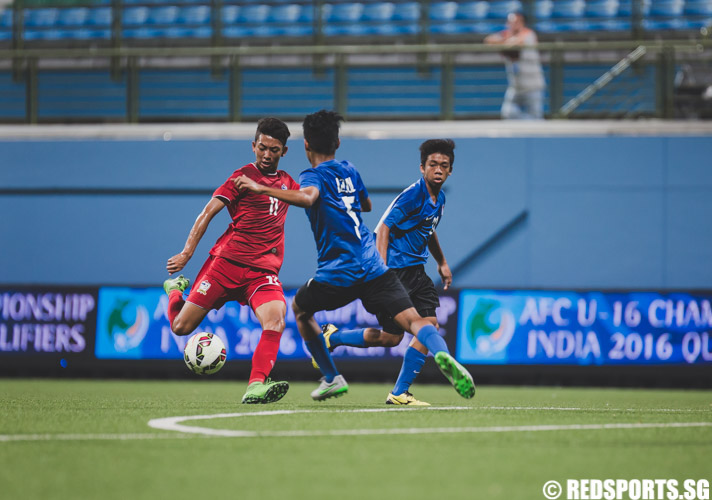 Korawich Tasa (THA #11) attempts a shot during the opening minutes of the 2016 Asian Football Confederation (AFC) U-16 Championship Qualifiers. He also scored a hat-trick in the game. (Photo 1 © Soh Jun Wei/Red Sports)

“The Singaporeans look good, and we were lucky because we got the first goal past. That made me very happy today,” said Thai coach Khunnan Payong, who was all praises for the hosts.

Payong also credited his charges, who were recently crowned ASEAN Football Federation (AFF) U-16 champions, for their performance on the pitch today.

“We have confidence because we had recently won the AFF U-16 Championship, so there may be a possibility that we may be a bit daunted against us.”

The final tournament of the championship will be held in India, where the top 16 teams in the region will compete. Group winners will qualify for the tournament, alongside hosts India and four or five of the best second-placed teams.

The Republic are the hosts of Group H, which include Thailand, Cambodia and the Democratic People’s Republic of Korea.

Right from kick-off, Singapore breathed down their visitors’ necks, threatening their goal with four attempts in just under eight minutes of play.

However, the Thais soon settled down into the game and picked up their offensive pace, leading to an opening goal by Korawich Tasa (#11) in the 18th minute. Russamee (#13) capitalized on a sleeping Singaporean defence and followed with two more goals to extend the visitors’ lead to three.

Led by forward Glenn Kweh (#9), the hosts had several opportunities at goal in the opening half, but they simply could not get past goalie Wutthipong Thiangthae (#1), who saved all but one of Singapore’s attempts, which was wide off the mark.

The second half also spelled trouble for the hosts, as all their attempts fed right into the hands of Thiangthae (#1).

Tasa (#11) went on to complete his hat-trick in the second half, adding to Singapore’s woes.

We had a good start in first half with a few good chances,” said Singapore coach Selvaraj Vengadasalam.

“I think what went wrong was that we conceded three early goals, which was a mountain to climb, and we couldn’t calm the players nerves in time.

“We tried to come back in the second half, did some good combination with some good chances but we simply couldn’t put ball in the net.”

Admitting that the hosts lacked the “killer instinct”, he added, “The Thais had it and they showed a lot of composure, which our boys need to learn from. That’s what we’re lacking in.”

“Technically, the Thais are better. It will be good if we can play more international friendlies to give the boys more exposure, especially with teams in the region.”

Singapore will next play the Democratic People’s Republic of Korea, who had earlier trounced Cambodia 7–0, on Friday, September 4, at 8 p.m. at Jalan Besar Sports Centre.