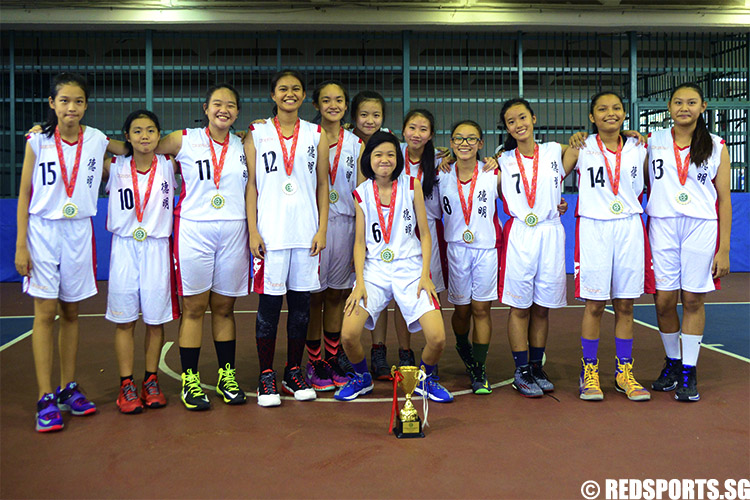 Dunman’s opening seven-point run early in the first quarter allowed them a comfortable lead. Dunman amassed shot clock violations, which Anglican High’s Fionn Yeo (#8) capitalized on to score their first two points. Another foul sent Anglican High’s Kimberly Tay (#7) to the line to earn them another two points. Dunman’s Megan Phua (#4) and Gabrielle (#12), however, hustled to sink in eight points to end the first quarter leading 15–5.

Anglican High’s Kimberly (#7) opened the second quarter by adding two. A mix of poor aim and lax defending prevented them from closing the gap. Dunman found their advantage in long range shots, which was often uncontested and right on target, for a 12-point streak. Fionn (AH #8) broke their run with a quick two-point shot, but the quarter ended with Dunman leading 34–13.

The next half saw Anglican High stepping up to score more than Dunman. Despite their efforts, Dunman’s stoic defending prevented them from narrowing the point gap.

Anglican High outscored Dunman in the third quarter with a tighter defence, limiting Dunman to seven points. While loose balls were tightly contested, Anglican High struggled to convert their opportunities with multiple missed attempts. However, their efforts allowed them to close the gap to end the quarter trailing 41–28.

Both teams were matched point-for-point as players upped the pace in the last quarter. Anglican High often found themselves in possession of the rebounds, but Dunman fared better at converting their shots. The scoring was 16–16 in the final quarter but Dunman’s strong performance in the earlier half secured them the east zonal title with a 57–44 victory.

“I feel that they performed well today – there was a strong fighting spirit, and they didn’t give up even when there was a foul. We’ve improved on our rebound and could stop them better, as compared to our previous match in the second round,” said Dunman captain Doo Jia Qi (#6).