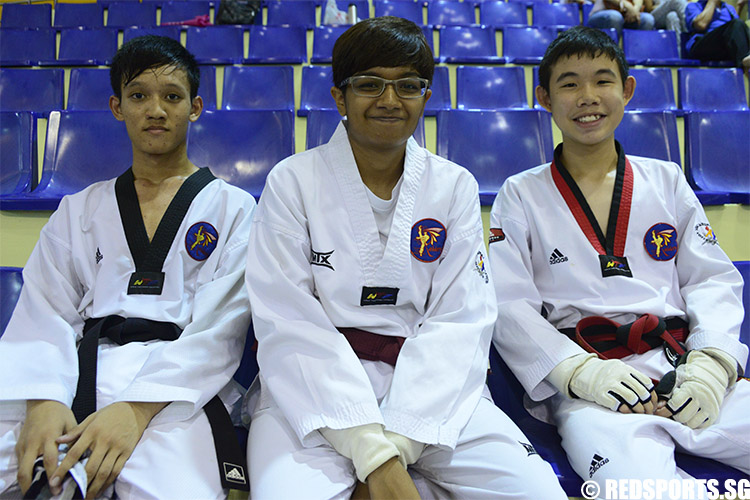 Woodlands Sports Hall, Sunday, August 1, 2015 — Singapore’s young kyorugi disciples met to kick, thrust, and block their way to new friends on the mat as their family and club mates cheered them on.

While there were plenty of nerves to go around, seasoned competitor Jaden Lim was happy with the relaxed atmosphere.

“There’s a sense of achievement after you compete, but you also get to train and meet new people,” he said. Jaden had picked up the sport when he was in kindergarten, and never looked back.

“It used to be very serious for me, but after 15 competitions – I’ve realised that there are more deadly and dangerous ways than taekwondo to get knocked out,” he said, laughing.

The Chung Cheng High (Yishun) student was there to compete under Raiders Club with Sri Nandhika Prakash of Temasek Polytechnic and Enoch Chin of Yishun Secondary School. Jaden was also accompanied by his parents, who had picked up taekwondo in 2011 and attained the black belt.

Nandhika had found the sport interesting when she first began in primary five, despite being intimated by better sparring partners. She persisted in her efforts to learn and has made it part of her life five years on.

“I train with my poly friends after school, then with my club,” she explained. “It’s good because I can learn from those better than me.”

Most of the participants competed under their clubs instead of schools because they first picked up the sport with a club. The national competition has the same format with students from different schools competing together as a unified club.

A rare exception is Nanyang Polytechnic, which sent a contingent of 15 to participate in the kyorugi event.

The NYP club has approximately 90 members, a mix of newcomers and seniors in the taekwondo fraternity.

Captain Magdalene Jio Allen explained that NYP makes it a point to teach each member equally so that the club can progress together.

“It can be weird because we teach our freshies some of the advanced techniques too, but our seniors help out and the club advances faster,” he said.

Jio had first learned taekwondo in primary four, but dropped the sport till his first year in polytechnic after getting too distracted by the sport.

“Back then my parents knew I was interested in martial arts, but I only knew of kungfu and Jackie Chan,” Jio said. “I didn’t know what was going on at first, but I liked it, and now I’m back to complete my journey.”

Ultimately, Jio makes the experience a priority in the club.

“We join to explore and be better, not emphasise on the competition. A negative experience may cause someone to drop out of the sport instead of learning more.”

The Singapore Youth Olympic Festival was first organised in 2011 for youth athletes aged 18 and below, and serves as a legacy of the inaugural Youth Olympic Games which was held in Singapore in 2010. In its fourth edition, the festival comprises nine sports held over two weekends from July 25 through August 2.