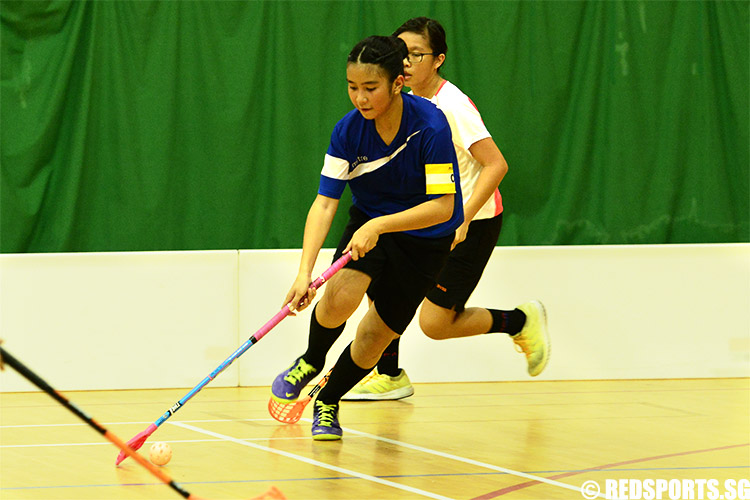 While Bukit Merah maintained the upper hand throughout the game, their attempts to score frequently went wide of the post or were frustrated by Bukit View’s defence.

The first period got off to a slow start with both sides unable to score. Bukit View was down to three players in the third minute, but managed to keep Bukit Merah at bay. A free shot close to Bukit Merah’s post gave them an opening, but the ball just missed the post. Nurul Syafiqah Bte Abdullah (BM #18) snatched control of the ball, forcing play into Bukit View’s half of the court and scored.

The ball was mostly kept away from Bukit Merah’s goalkeeper, but the team struggled to score. Abygael Attirmidzi Koh (#7) and Nurul (#18) led the attack and took turns to score. The first period ended 4–0 in Bukit Merah’s favour.

Bukit Merah continued to dominate in the second period, but found themselves missing many opportunities to score. Nurul (#18) shrugged off a tumble in the first period to assist Abygael (#7) for the first goal of the period. Not long after, Althea Dominique De Gracia (#14) evaded Bukit View along the court to pass the ball to Nurul Shahirah Bte Salleh (#26) for an easy tap into the goal.

Down to three players, Bukit Merah switched to defensive play as Bukit View pressed their advantage. While the ball was kept within sight of Bukit Merah’s goalkeeper with Bukit View’s attempts often on target, the keeper made composed saves. With successful attempts by Abygael (#7), Siti Mariam (#8) and Nurul (#18), Bukit Merah ended the second period 6–0 (10–0).

The third period opened to both sides aggressively on the attack. The struggle continued till the third minute, when the successful attempt from Bukit Merah almost looked accidental. Bukit View found an opening soon after as Nurul Shahida Bte Izhar (BV #7) capitalised on their defence error to make it 12-1. However, Abygael (#7) answered half a minute later.

The rest of the third period mostly saw Bukit Merah circling Bukit View’s post, but Bukit View broke through often to come close to scoring. Bukit View’s Jeslina Bte Zulkifli (#28) held on strongly as a defender, and the period ended 3–1 (13–1).

Bukit Merah coach Saravarnam highlighted Sri Syawallya Shusilawatie (#17) for playing well during the game despite being a secondary one student.

“We missed a lot of goals especially during the hit-in a few inches from the goal post, but I think my girls can do better,” said Bukit Merah captain Abygael. “My goalkeeper did well – Bukit View had shots on target but she defended the ball.”