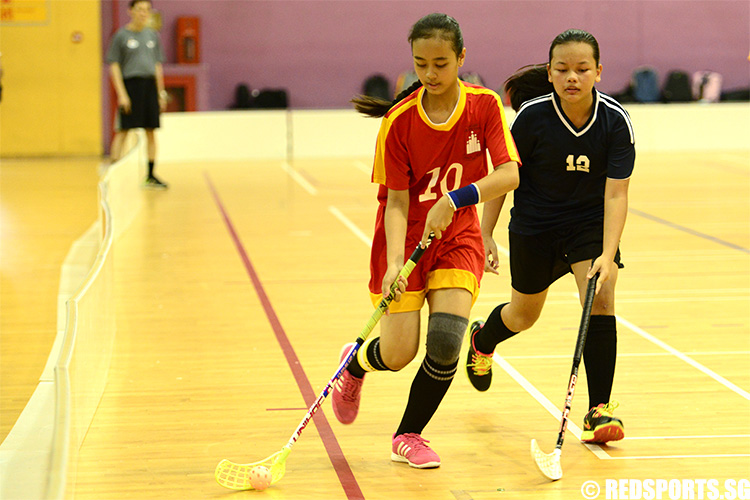 Hougang Sports and Recreational Centre , Monday, July 31, 2015 — Bedok North dominated Assumption English School 11-0 for their third win of the season. With a win-loss record of 3–1, they are likely through to the second round.

Bedok North maintained possession of the ball throughout the game, but found it difficult to create openings for a clear shot. Captain Siti Najihah Bte Abdul Rahim (#10) was top scorer of the game with 6 goals, and Siti Nasyitah Bte Abdul Rahim (#9) contributed four goals. Celeste Tan (#23) added the one for the team.

The first period began with Bedok North keeping the ball in AES’s half of the court, but were fended off by (AES #28) clearing the ball away from the post. AES attempted to push Bedok North away, but Nurain Bte Jamaludin (#8) held her ground.

Siti Nasyitah (#9) drew first blood when her shot flew over the goalkeeper’s shoulder and into the net. Siti Najihah (#10) and her took turns to score, ending the first period 0–4 in Bedok North’s favour.

Bedok North continued to dominate in the second period and created openings to score. However, their shots often went wide. AES’s goalkeeper Quek Hui En (#18), was well-aware of her blind spots, and constantly kept an eye of Bedok North as they tended to circle the post before slotting the ball in.

Celeste Tan (BN #23), however, capitalised on an opening to slot the ball in. Siti Najihah (BN #10) swiftly followed up with two goals to end the second period 0–3 (0–7) in their favour.

Bedok North kept their pace in the third period, and did not slow down on their attacks despite the wide lead. AES’s goalkeeper Hui En (#18), appeared to be more certain of Bedok North’s play and made multiple saves. Bedok North was undeterred, but AES’s defence kept up with their onslaught of attacks.