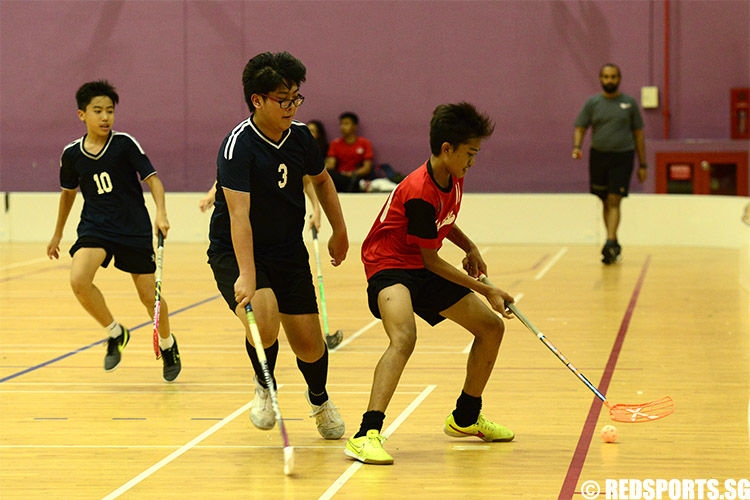 Azhari Saputra B Mustaf (#11) handles the ball against AES. Azhari was the top scorer of the game with six goals. (Photo 1 © Louisa Goh/Red Sports)

Hougang Sports and Recreational Centre , Monday, July 31, 2015 — East View Secondary School defeated Assumption English School (AES) 9–1 for their second win of the season. East View currently has two wins and two draws, and one more game to play next Tuesday. AES has a win-loss record of 1–3.

The first period opened slowly, with neither side coming close enough to score. While East View maintained the upper hand throughout the game, they were often hampered by fancy movements. Azhari Saputra B Mustaf (#11) secured a clear shot and scored the opening goal. Mohamed Jafeen (#64) followed up minutes after when he faked an attempt to move away, but turned back to drill a hard shot into AES’ post.

The second half of the first period saw many lost opportunities for East View. While Mohamed Jafeen’s (EV #64) play deliberately drew AES’ defence away from the post, his passes were often not received – losing the openings he had created. AES attacker (#10), however, found himself frustrated by a persistent Sean Leow (#13). The first period ended 2-0.

Both schools picked up the pace in the second period. East View’s Abid Shadiq Ashidiq PCK (#50) took a free shot to assist Azhari Saputra’s (#11) sudden attempt for their third goal. An opportunity would open again for Azhari (#11) minutes later after his initial attempt rebounded to make it 4–0 (6–0).

Both schools were allowed a penalty shot, but Azhari (EV #11) and Jovian Kee (AES #10) failed to add one for their team. The last few minutes saw AES dominating possession of the ball, as the number of East View players dropped to three, then two. AES came close to scoring, but Sean (EV #13) and his goalkeeper foiled their attempts. Azhari (EV #11) capped off the second period with a runaway shot to make it 6–0 with fifteen seconds to spare.

The last period opened with aggressive attacks from both sides going wide. East View’s players found themselves marked by AES, and each movement matched to limit opportunities. AES finally found their opening in the fourth minute when (#19) broke past East View’s defence to score one for his team. East View capped the period with two more goals to end 3–1 (9–1).