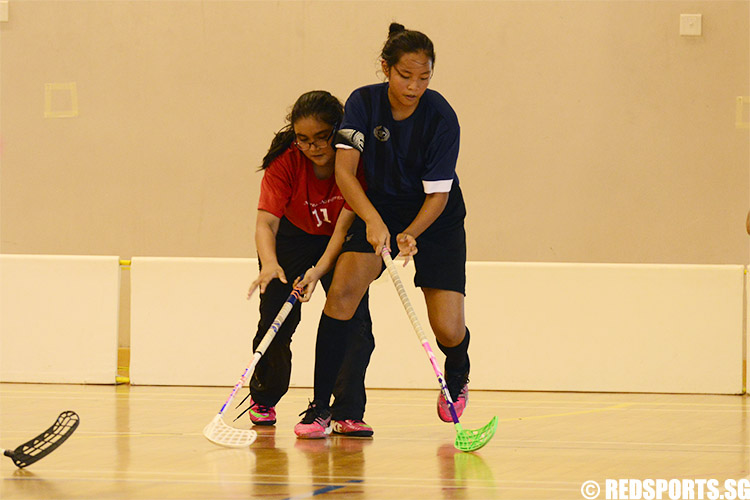 Bedok South captain Geraldine Lee (#9) tussles for control of the ball. She was the top scorer of the game with three goals, all scored in the first period. (Photo 1 © Louisa Goh/Red Sports)

Bedok South and Swiss Cottage were evenly matched for most of the game.

Bedok South, however, often forced Swiss Cottage into defending in the first period. Maryam Hamad (BD #14) persistently directed the ball away from her half of the court to keep play away from her goalkeeper. While Bedok South found themselves playing in Swiss Cottage’s half, they encountered difficulties breaking through the defence.

The first scare for Bedok South came five minutes in when the ball stopped just before the net, and again when the ball flew close seconds later. Bedok South’s goalkeeper Puteri Zulaikha (#1) made composed saves both times, giving them the opening to strike back.

From then, Geraldine Lee (#9) led the attack for Bedok South. Her attempts found the back of the net thrice in quick succession to give her team a 3–0 lead. Swiss Cottage came close several times after, but the goalkeeper kept the ball away. The first period ended 3–0.

The second period saw Bedok South continue their onslaught against Swiss Cottage. Pressed for space, the Swiss Cottage goalkeeper rapidly fended off attempts to score. Megan Wah (BD #8) aggressively drove the ball across the court, but Swiss Cottage defence stepped in to abort the attempt.

Both sides were clearly frustrated by the deadlock, but it was Lourdes Ikia Poh (BS #7) who finally broke it when she circled the net to tap the ball in from the goalkeeper’s blindspot to end the period 4–0 in Bedok South’s favour.

The struggle spilled over into the third period. Swiss Cottage’s Sherein Zarinie Bte Zaidi (#14), and Lim Ying Wei (#8) attempts to score were repeatedly denied by the Bedok South goalkeeper, but an opportunity arose when a moment of confusion left only two Bedok South players on the court. The attempt, however, went out of bounds.

Bedok South’s Lourdes (#7) ended the game at 5–0 when her quick-wrist shot found the back of Swiss Cottage’s goal.

“I think we fought more for this game, and my team showed an improvement from the previous match with defence and more passes,” said Bedok South captain Geraldine (#9).