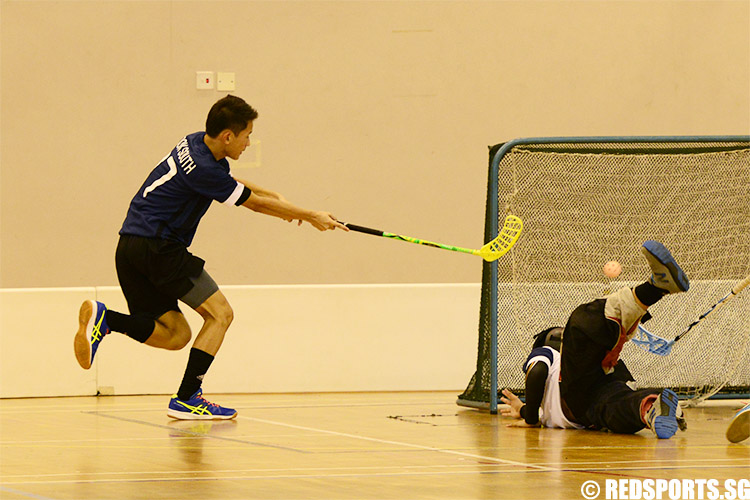 East View had lagged behind 0–2 after the first period and their goalkeeper was often in the thick of the action as the team was constantly on the defensive.

The second period saw Bedok South risking shots from half court, and their defence frustrated East View with well-times steals to draw play away from their half of the court.

Both sides faced difficulty maintaining control of the ball – they often missed and lost the opportunity to strike while the defence was still catching up. The second period ended 3–2 in Bedok South’s favour, and the tense third period ended in a 5–5 draw.

Both sides entered the third period eager to win as control of the ball rapidly switched sides. Bedok South had looked to be in control of the game but attempts by Muhammad Nur’umarul B Ju Raime (EV #7) and Azhari Saputra B Mustaf (EV #11) closed the point gap in the last minute of the second period.

The boys ran faster, tussled harder and found themselves making more deliberate passes as they fought to convert opportunities into goals. Nonetheless, neither side found relief as the ball took turns to circle their goal posts.

Hope for East View came knocking when Azhari (EV #11)’s attempt found the back of the net to equalise the score in the second minute.

But Bedok South inched back into the lead with Justin Aidan Downing (#73) drilling a hard ball past the East View goalkeeper. The goalkeeper had fended off multiple attempts by then, and kept going till another attempt by Azhariv(EV #11) sneaked past Bedok South’s defence and into goal.

Uncertainty struck when Azhari (EV #11) was penalised and had to sit out of the game for two minutes. With East View down to three players, Bedok South seized their chance to pressure them into defensive manoeuvres.

The tension ratcheted up a notch in the sports hall, with all unwilling to relinquish control of the ball.

A sprint across the court almost led to East View scoring – the ball first hit the pole, then rebounded away. Bedok South found openings but faced difficulty capitalising as balls went wide.

Nearly six minutes after the equaliser, Mohamed Jafeen (EV #64) broke through Bedok South’s defence to shoot. It went past the goalkeeper and into the net, bringing East View into the lead at 5–4.

Bedok South’s reply came minute later after a struggle around East View’s goal post. Justin (BS #73) equalised to bring the score to 5–5 to end the game in a draw.

“I think this is a good step to build confidence for future matches,” said East View coach Lim Jin Quan. “This is their first tight game but they fought hard, and I think they enjoyed it.”