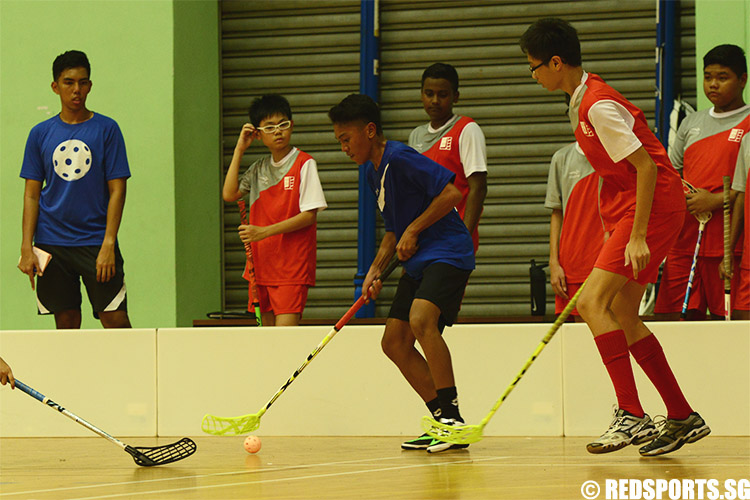 Hougang Sports and Recreational Centre, Monday, July 20, 2015 – Bukit Merah Secondary School stomped to a resounding 10–3 win over Jurong Secondary School in the National C Division Boys Floorball Championship. Bukit Merah now have a perfect 3–0 win-loss record, and have set their sights of finishing in the top four this year.

They swiftly went on the offensive in the first period, with Earl John Alicante Embile (#29) breaking past Jurong’s defence for the first goal. Tan Shao Siang (#10) and John (#29) followed in rapid succession to claim three goals in the first five minutes.

Jurong found their opportunity not long after when Glenn Kok (#17) capitalised on a defensive error for an easy tap-in. With their first goal, Jurong rallied to deny Bukit Merah a chance to score.

The Jurong defence faltered in the ninth minute when an attempt by Ng Yong Jie (BM #7) flew past their players and into the net. Nevertheless, Yong Jie (#7) then found himself on the defensive as Jurong attempted to even the score. The first period ended 4–1 in Bukit Merah’s favour.

“The goal took us by surprise,” said Bukit Merah captain Muhammad Zaidan B Abdul Wahab (#2). “Our playing today was not up to standard. We need better communication.”

The second period saw Jurong attempt to take the lead. Both sides frequently tussled for the ball, but John (BM #29) danced around Jurong and finally broke through to score. Any further attempts to score by Jurong were swatted away by Bukit Merah’s goalkeeper as they led 6–1 after the second period.

The last period saw both sides stepping up the tempo. Anxious to widen the score gap, Bukit Merah peppered Jurong with multiple attempts. The Jurong goalkeeper and his defenders registered composed saves until Yong Jie (BM #7)’s attempt slid under the goalkeeper and into the net.

Jurong answered half a minute later when Brian Chew (#10) seized an opening to score their team’s second goal. Bukit Merah, however, widened the gap again when captain Muhammad Zaidan (#2) circled the goal post to quietly slip the ball in, much to the surprise of those on court. John (BM #29) capped off his strong performance when his shot just beyond the grasp of the Jurong goalkeeper to net him his fifth goal.

Bukit Merah attacks escalated in the last five minutes of the game but they in turn faced an onslaught of Jurong players breaking through their defence. Bukit Merah fended them off, enough for Benjamin Cheong (#26) to cap the game with the 10th goal.

“We can do better, but John (#29) did well today – his shots are always on target. I think Benjamin (#26) defended well today too,” said Bukit Merah captain Muhammad Zaidan (#2), his eye set on a top-four finish for his team.