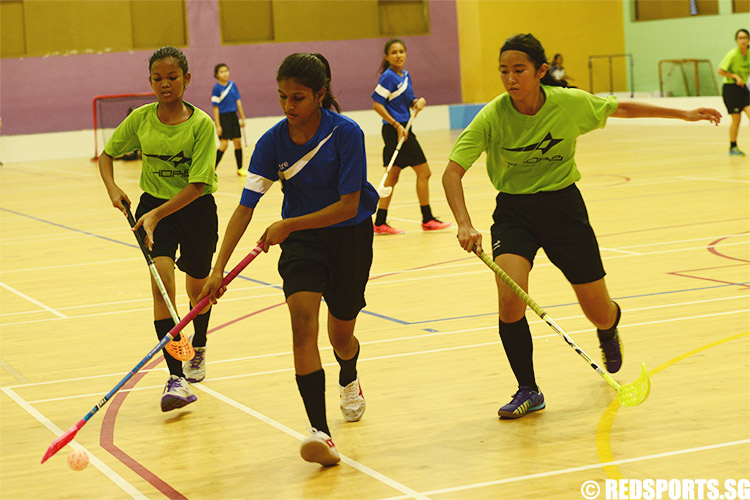 Nurul Syafiqah (#18) controls the ball against Springfield. She was the top scorer with 10 goals during the game. (Photo 1 © Louisa Goh/Red Sports)

Keenly remembering their B Division seniors’ 4–5 loss to Springfield earlier in the year, the C Division team seized the opportunity to pressure their opponents throughout the match.

“I think today’s the day my team played their hearts out and showed that they wanted to win,” said Bukit Merah captain Abygael Attirmidzi Koh (#7).

The first period began with Bukit Merah aggressively playing in Springfield’s half of the court, as Abygael (BM #7) and Nurul Syafiqah Bte Abdullah (BM #18) tag teamed to hound the Springfield goalkeeper.

Nurul drew first blood just 14 seconds into the game, and her shots continued to find the net to give Bukit Merah a 5–0 lead at the end of the first period.

As captain Abygael (BM #7) is typically the top scorer, Nurul’s rapid succession of goals had been unexpected.

“I was scared before the game, but I began to believe that I could play well after scoring my second goal,” said Nurul.

Her team rallied to pressure Bukit Merah, but lost the upper hand after a tussle between Jing Hui (SF #61) and Nurul (BM #7). She swiftly guided the ball away to net Bukit Merah’s sixth goal. Bukit Merah added three more goal to end the second period leading 9–1.

Springfield’s Jing Hui (#48) then deftly drilled the ball into Bukit Merah’s goal to score her team’s second. Jing Hui added two more goals as both teams matched each other goal for goal in the fading moments of the game.

The game ended in a 12–4 win for Bukit Merah and the C Division players promptly rushed to their B Division seniors after the buzzer sounded to celebrate the win.

“Even though we score, it’s not for us alone – it’s for our team. If not for the team, we wouldn’t make it,” said captain Abygael, who was simply happy that her team had prevailed.