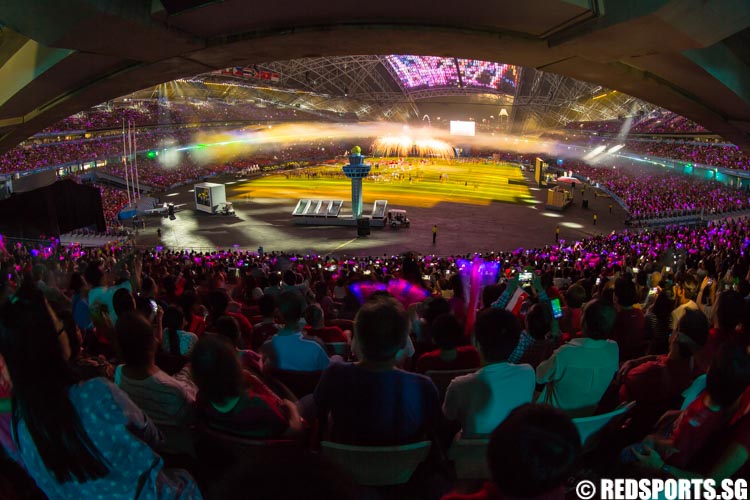 National Stadium, Tuesday, June 16, 2015 — A closing ceremony marked the end of the 28th Southeast Asian (SEA) Games this evening, as hosts Singapore tallied a record total of 84 gold, 73 silver and 102 bronze medals to place second amongst the 11 participating countries.

The Republic’s second-placed finish is the highest since the 1975 Games in Thailand.

Traditional powerhouses Thailand continued their superiority at the top of the table, finishing with 95 gold, 83 silver and 69 bronze medals. Vietnam finished third in the standings with a total of 73 gold, 53 silver and 60 bronze medals.

Over the past 18 days in 36 sports, Singapore’s largest-ever contingent of 747 athletes also delivered 25 Games records, 29 national records, 74 personal bests, and many first-time medallists. 421 were also making their official Games debut.

Of the 36 sports, the Republic’s swimmers achieved the highest medal count of 42 (23 golds, 12 silvers and 7 bronzes).

Swimmers Joseph Isaac Schooling and Quah Zheng Wen were the most bemedalled athletes, winning one in every event they competed in. Schooling won nine gold medals and set Games records in all nine events, while teammate Quah finished with 12 medals (7 golds, 4 silvers and 1 bronze).

Besides the recognition of athletes’ accomplishments, the closing ceremony also paid tribute to about 17,000 volunteers for their contributions to the operations of the Games.

The 29th edition of the Games will be held in September 2017 across three states in Malaysia – Selangor, Sabah and Sarawak.