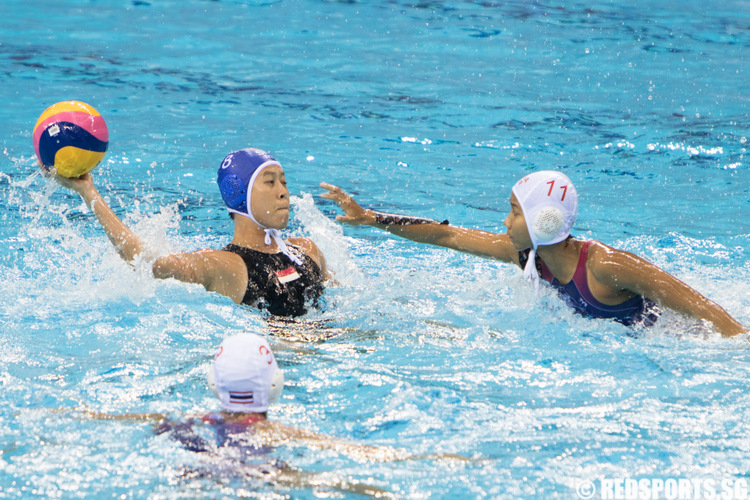 Thailand won the gold medal while Indonesia finished with the bronze.

“We played pretty well, played our best and there were no regrets left in the pool,” commented team captain Gina Koh (SIN #2). “Unfortunately, we lost to Thailand but we’ll definitely come back harder and stronger in the next SEA games and next competition to come.”

The match started off well for the hosts with goalkeeper, Grace Fu (SIN #13), saving two goal attempts by the Thais. However, a run-in by Sheryl Tan (SIN #11) with the visitors gave the latter a penalty and their first goal of the match.

The Singapore team came back strong after a time-out to equalise the score at 1–1. The quarter ended with both sides adding one more goal each through Sathitanon Alwani (THA #12) and Angeline Teo (SIN #7).

Thailand took another penalty in the second quarter to gain a 3–2 lead. However, the home team remained undeterred as they equalised at 3–3.

The second half was littered with several unsuccessful scoring attempts by Singapore. Their poor run was then made worse when the Thais scored their fourth goal, and then their fifth through another penalty for the viistors to lead 5-3.

But Singapore’s hopes were renewed when Gina Koh (SIN #2) pulled one back for the hosts. Unfortunately, despite efforts from the Singapore girls, it was a case of too little too late.

“We missed a couple of chances. The Thais played better,” said head coach, Choo Chin Cheng, regarding the team’s performance. He also added that the girls were too tense and rushing for the goal, areas he said that needed to be improved on.

Regarding the missed opportunities during the match, Gina replied, “There were tries during the game and I’m actually pleased that our teammates actually do make the try even though we’re behind. And that’s something that we need to continue to work on in the future – to actually place the shot in, in pressure moments.”